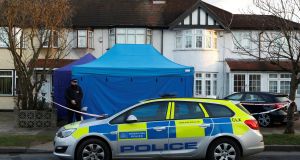 British counter-terrorism police were on Tuesday investigating the unexplained death of a Russian associate of late tycoon Boris Berezovsky but said the death was not thought to be linked to a nerve agent attack on a former Russian double agent.

Nikolai Glushkov (68) was discovered dead late on Monday at an address in Clarence Avenue in southwest London.

British police, who did not name Glushkov, said that they were investigating the death of a man in his 60s who lived on Clarence Avenue.

Police said the death was not linked to the poisoning of Sergei Skripal and his daughter in Salisbury.

“There is no evidence to suggest a link to the incident in Salisbury,” the Metropolitan Police said in a statement.

Counter-terrorism police were leading the investigation “because of associations that the man is believed to have had”.

Berezovsky was found dead in March 2013 with a scarf tied around his neck in the bathroom of a luxury mansion in Ascot, an affluent English town west of London.

The 67-year-old tycoon had been one of Russia’s most powerful figures in the years after the collapse of the Soviet Union. He was known as the “godfather of the Kremlin” before fleeing to London in 2000 after a row with Russian leader Vladimir Putin.

Britain granted Berezovsky political asylum three years later on the grounds his life would be in danger if he went back home.

His family feared he had been murdered by enemies from Russia, but British police and forensic experts concluded Berezovsky had taken his own life.