Chemical agent ‘more dangerous and sophisticated’ than sarin or VX 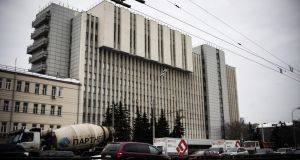 The State Scientific Research Institute of Organic Chemistry and Technology in Moscow. Novichok nerve agents were allegedly developed by scientists at the institute in the 1970s and 1980s. Photograph: Alexander Nemenov/AFP/Getty Images

British prime minister Theresa May’s confirmation that the substance used in the attack on Sergei and Yulia Skripal belonged to the Novichok class of nerve agents has turned a spotlight on what are now considered among the world’s deadliest chemical weapons.

Andrea Sella, professor of chemistry at University College London, described the nerve agents as “variants on traditional phosphorus-based nerve agents” that had been developed by the Russians “to get one up on the Americans during the Cold War”.

But they are significantly less well known than nerve agents such as sarin, which has been used in chemical weapons attacks in Syria, or VX, which was used to kill Kim Jong-un’s brother last year.

“Very little has been published in open scientific literature about them,” said Alastair Hay, professor of environmental toxicology at the University of Leeds.

While Prof Sella dismissed suggestions that Novichok agents were undetectable, he acknowledged they might not be “on the obvious checklist” for first responders and forensic teams.

“You can detect it but you have to know what you are looking for,” he said.

Gary Stephens, a pharmacology expert at the University of Reading, said Novichok “is a more dangerous and sophisticated agent than sarin or VX and is harder to identify”.

It has been reported that Novichok agents are five to eight times more lethal than VX, which was previously thought to be the world’s deadliest nerve agent.

Prof Stephens said Novichok agents cause a “slowing of the heart and restriction of the airways, leading to death by asphyxiation”.

“One of the main reasons these agents are developed is because their component parts are not on the banned list,” he said, referring to the Chemical Weapons Convention, an international arms control treaty that came into force in 1997. “It means the chemicals that are mixed to create it are much easier to deliver with no risk to the health of the courier.”

It remains unclear how and where the Skripals ingested the agent.

But according to Responding to Terrorism, a medical handbook published in 2010, Novichok nerve agents “may be dispersed as an ultra-fine powder as opposed to a gas or a vapour” and people are usually poisoned “by inhalation, although absorption may also occur via skin or mucous membrane exposure”.

They said antidotes to nerve agent poisoning must be given immediately. But they cautioned that “some Novichok agents have been specifically designed to be resistant to standard nerve agent antidote therapy”.

The doctors said treatment of anyone affected “must concentrate upon basic life-support measures and decontamination in order to remove the agent and prevent additional exposure”.

But they warned that even after appropriate nerve agent antidote treatment is given, Novichok agents are likely to “produce more permanent injury”.