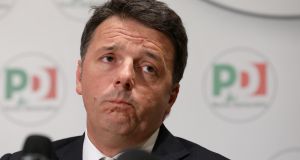 Former prime minister of Italy, Matteo Renzi, has formally resigned as leader of the Democratic Party following its crushing defeat in the latest parliamentary election.

Party leaders named Maurizio Martina, who has served as agriculture minister in the outgoing government, as the Democratic Party’s interim leader.

Italian news agency Ansa quoted Mr Martina as saying that the Democrats would follow Mr Renzi’s plan to remain in opposition and not join any government.

No party or coalition won enough votes in the March 4th election to govern alone. Arduous talks will determine if either anti-establishment Five-Star Movement, the party with the most votes, or the centre-right coalition led by the anti-immigrant Lega, which would control more parliamentary seats, can form a stable government.

Mr Martina said Lega and the Five-Star Movement “don’t have any alibis now” and should “take their responsibility” to form a government. – AP