Commission president heckled as he says NI Border not an Irish issue, but a European one 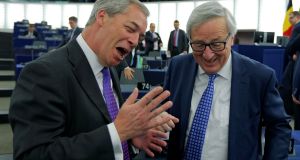 Brexit campaigner Nigel Farage MEP (left) speaks to European Commission president Jean-Claude Juncker ahead of a debate on the guidelines on the framework of future EU-UK relations at the European Parliament in Strasbourg. Photograph: Vincent Kessler/Reuters.

The UK will come to regret its decision to leave the European Union, the president of the European Commission, Jean-Claude Juncker, has said.

Addressing the European Parliament in Strasbourg, Mr Juncker said things “cannot remain as they are” for the UK in its relationship with the EU after Brexit.

Mr Juncker was cheered by Eurosceptic MEPs as he noted the UK’s departure was due on March 29th, 2019. Responding to their applause, he said the time would come “when you will regret your decision”.

However, ex-Ukip leader Nigel Farage claimed the commission was seeking to “bully” the UK and suggested Theresa May should back a departure from the union without a transition deal.

The EU and Britain are hoping to seal a deal this month on a transition period after Brexit, and start talks on their future relationship this spring.

In a message to Ms May ahead of next week’s European Council summit, Mr Juncker said the EU needed “more clarity on how the UK sees its future relationship”.

Mr Juncker said “cherry-picking is not going to be possible” in the future trade relationship between the UK and EU.

“I would rather have preferred Britain not to have decided to leave the European Union, but anyone who leaves the European Union has to know, frankly, what this means,” he said. “If you decide to jettison, leave behind, the common agreements and rules, then you have to accept that things cannot remain as they are.”

Mr Juncker said the controversial “backstop” proposal for dealing with the Northern Ireland Border “translates faithfully” the agreement reached between Ms May and the EU in December.

He said the EU was ready to work with the UK on its preferred option of the border issue being resolved in the future trade deal, or by other specific measures.

He added that the commission needed “to receive concrete proposals from the UK first”.

“The 27 member states stand firm and united when it comes to Ireland. For us this is not an Irish issue, it is a European issue,” he said.

Mr Juncker was heckled by one MEP who shouted “it is a British issue”.

The EU’s chief Brexit negotiator Michel Barnier defended a proposal for the EU to continue to regulate trade in the North after Brexit, should no other ways emerge to avoid a hard border.

He said Ms May’s decision to leave the single market and customs union was “closing doors” to possible models of future co-operation.

“It is our responsibility to detail operationally how we will avoid a hard border on the island of Ireland without another solution and bearing in mind the decision of the UK to leave the single market and the customs union,” he said.

Mr Barnier added that it was a “rather surprising idea” to think the EU could accept convergence in some areas “and at the same time open up the possibility for divergence when there is a comparative advantage to be had” for the UK.

“It’s time to face up to the hard facts,” he said.

“The UK is choosing to leave the union, the single market and the customs union, we have noted that.

“Do they also want to distance themselves from our regulatory model, the one that we have constructed together with you — and you with us — for 44 years?”

He questioned whether that could result in the UK “dumping” products on EU markets by diverging from the bloc’s economic and social model after Brexit.

“There was this Mansion House speech by Ms May, but it was mainly repeating the red lines that we know already,” he said, adding that it was time to move beyond “slogans” and “sound bites”.

His European Parliament motion calls for an “association agreement” to deal with the future UK-EU relationship.

But it insists on a “binding interpretation role” for the European Court of Justice (CJEU) and rejects UK efforts to “cherry-pick” single market access for particular sectors, such as the financial services industry.

Mr Farage, a supporter of US president Donald Trump, said the UK should leave the EU without a transition deal and claimed a transatlantic trade deal could be struck “in 48 hours”.