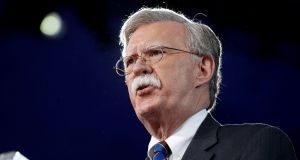 John Bolton, the incoming US national security adviser, will have the ear of Donald Trump at a perilously fraught moment in world affairs.

A notorious hawk who advocates the unilateral wielding of US might, Bolton is dismissive of international diplomacy, and has called for the bombing of both Iran and North Korea.

The departure of HR McMaster, who was credited by some as being a moderating force on the president, and his replacement by one of the most aggressive thinkers in the world of US foreign policy, will spread fear in diplomatic circles that the Trump administration could be poised to take a dramatic hawkish turn.

The shuffle comes as Washington is already bracing itself for the potential of imminent face-to-face talks between Trump and the North Korean leader Kim Jong-un over the regime’s development of nuclear weapons.

Bolton, who will leave his post as a senior fellow at the rightwing American Enterprise Institute to join the White House on April 9th, has made clear his preference for how to deal with North Korea – bomb it. Last month he wrote an opinion column for the Wall Street Journal in which he made a legal case for a pre-emptive strike.

“It is perfectly legitimate for the United States to respond to the current ‘necessity’ posed by North Korea’s nuclear weapons by striking first,” he wrote.

The former ambassador, whose basic approach to diplomacy is summed up in the title of his book Surrender is Not an Option, has made a similarly combative case for Iran.

He was scathing of Barack Obama’s attempt to deal with Tehran’s nuclear program through negotiation, writing in the New York Times in 2015 that only bombing by the US and Israel would take out Iran’s uranium-enrichment installations and prevent disaster.

The mustachioed Bolton has had a long, frequently controversial career in government. He held senior positions in the administrations of Ronald Reagan and the elder George Bush, where he led successful US opposition to joining the international criminal court and made a strident attempt to block the introduction of stronger global controls on biological weapons.

He came to prominence as a household name under George W Bush who appointed him to be the US ambassador to the UN in 2005, when the Iraq war was still blazing. To put Bolton at the heart of the US relationship with the community of nations was contentious, to say the least, as he made little attempt to disguise his deep-seated contempt for the world body.

He once noted if that if the 38-floor UN building in New York “lost 10 stories, it wouldn’t make a bit of difference”. His other legendary remark was that “there is no United Nations. There is an international community that occasionally can be led by the only real power left in the world, and that’s the United States, when it suits our interests.”

Bolton’s arrival in the inner sanctum of the Trump presidency has been a long time coming. Michael Wolff revealed in his inside account of the White House, Fire and Fury, that Trump’s former senior counselor Steve Bannon had urged the president to hire Bolton. So too did the late Fox News executive, Roger Ailes. “He’s a bomb thrower,” Ailes said last year, according to Wolff. “And a strange little fucker. But you need him.” Trump seems now to have come round to that way of thinking. – Guardian Service