Post-Brexit blue British passports to be made in France

Move condemned by leading Brexiteers as a national humiliation 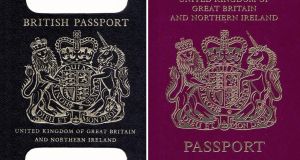 An old British passport and a burgundy UK passport in the EU format. The planned new post-Brexit blue passport is seen by Brexiteers see as a symbol of the UK’s regained independence. Photograph: PA Wire

Theresa May’s government has ruled out reversing its decision to commission a European firm to print Britain’s blue passports, a move condemned by leading Brexiteers as a national humiliation. Franco-Dutch firm Gemalto won the contract to produce the passports, which will replace the current burgundy ones which are made by British firm De La Rue.

The Home Office said the decision would save taxpayers about £120 million (€138 million) over the five years of the contract.

“The preferred bidder has been selected following a rigorous, fair and open competition and all bidders were notified of the outcome last night. The chosen company demonstrated that they will be best able to meet the needs of our passport service with a high quality and secure product at the best value for money for our customers and the taxpayer,” a spokesman said.

Last December, Ms May announced the return of Britain’s blue passports after Brexit, describing the passport as “an expression of our independence and sovereignty – symbolising our citizenship of a proud, great nation”.

Gemalto will not be named officially as the winner of the contract for a few weeks, to allow for a 10-day legal standstill period. The prime minister’s official spokesman said the decision had been made but he suggested that EU procurement rules were responsible for the tender process.

“What we have is a process we put out to tender,” he said.

“We want to follow the correct process – that’s the right thing to do. That’s what we’re doing here. When we leave the EU we will have more power over setting our own procurement rules, but we will still follow a formal process.”

De La Rue’s chief executive Martin Sutherland said the company would appeal against the decision and called on ministers to visit its factory in Gateshead and explain it to the workers there.

“The passports are manufactured in Gateshead. We have a very skilled and proud workforce in Gateshead. I’m going to have to look at them in the whites of their eyes and explain why the British government thinks it’s a good idea to buy French passports rather than British passports.”