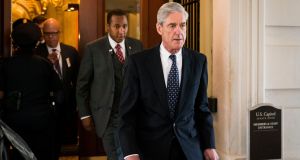 US president Donald Trump resumed his assault on special counsel Robert Mueller on Wednesday, tweeting his support for an article written by a Harvard law professor that appeared to question Mr Mueller’s appointment.

In a series of typo-ridden tweets, Mr Trump appeared to quote Prof Alan Dershowitz’s comments in an article that Mr Trump said was “right when he said there never should have been a Special Council [sic] appointed”.

“Special Council is told to find crimes, whether a crime exists or not. I was opposed to the selection of Mueller to be Special Council. I am still opposed to it,” Mr Trump tweeted, quoting Mr Derschowitz. “I think President Trump was right when he said there never should have been a Special Council appointed because there was no probable cause for believing that there was any crime, collusion or otherwise, or obstruction of justice!”

Mr Trump later deleted and corrected some, though not all, of the errors. The article by Mr Derschowitz was published in The Hill on Wednesday morning.

Mr Trump’s comments followed a series of interventions on Twitter over the weekend in which he specifically criticised Mr Mueller, the special counsel appointed last summer to lead the inquiry into Russian collusion in the 2016 US presidential election.

“The Mueller probe should never have been started in that there was no collusion and there was no crime,” Mr Trump tweeted on Saturday, adding that the inquiry was based on a false dossier funded by “crooked Hillary” and the Democratic National Committee.

...there was no probable cause for believing that there was any crime, collusion or otherwise, or obstruction of justice!” So stated by Harvard Law Professor Alan Dershowitz.

He also accused the Mueller team of being peppered with Democrats and Hillary Clinton supporters.

Mr Trump’s outburst prompted an alarmed response from members of his own party.

Senator Lindsey Graham said that firing Mr Mueller would be “the beginning of the end of his presidency”, while Senate majority leader Mitch McConnell said that he should be “allowed to finish his job”.

“I think he was an excellent appointment,” he said.

But the top Republican in the Senate stopped short of calling for new legislation to be introduced to protect the special counsel, an idea that has been gathering traction among Democrats in Congress.

“I don’t think that’s necessary. I don’t think Bob Mueller is going anywhere. I think there is widespread feeling, and the president’s lawyers obviously agree, that he ought to be allowed to finish the job.”

It has been reported that Mr Trump’s lawyers have handed over documents to the Mueller investigation in the hope of limiting the scope of any interview between Mr Mueller and the US president.

Meanwhile, as business in Washington ground to a halt on Wednesday due to heavy snowfall brought by Winter Storm Toby, the White House was preparing to unveil a series of fresh tariffs on Chinese imports, according to officials.

Tariffs on steel and aluminium imports, which will hit China, Brazil, Mexico and European Union countries, are due to come into effect on Friday. But the White House may unveil more tariffs as early as Thursday, targeting what it believes is China’s unfair intellectual property practices.

America runs a trade deficit of $375 billion with China, prompting the Trump administration to unveil strict new sanctions on its exports.

Addressing the House Ways and Means Committee on Wednesday, US trade chief Robert Lighthizer said that Mr Trump was “seeking to build a better, fairer system of global trade that will lead to higher living standards for all Americans”.