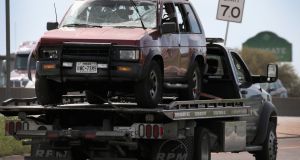 The vehicle that Austin package bombing suspect Mark Conditt was driving when he blew himself up being towed from the crime scene along Interstate 35 in suburban Austin on Thursday. Photograph: Scott Olson/Getty Images

It was not much – surveillance footage in and near an Austin-area FedEx store showing a man in a disguise dropping off packages. But for the cadre of investigators from the FBI and other local, state and federal agencies who had been hunting a mysterious and prolific bomb-maker, it was what they needed – their first big break.

Up to that point in a two-week investigation, officials had never laid eyes on the man they believed was responsible for terrorising the Texas capital since March 2nd. In the security footage, a red 2002 Ford Ranger could be seen, officials said. Because the authorities did not have a licence plate number, they began combing through records – all of them, for every vehicle with the same make and model in Texas. Investigators then began trying to match the records with a white male, possibly in his 20s.

And there was another, more unorthodox clue from the surveillance video: the suspect’s hands. He was wearing pink construction gloves. Investigators determined the same type of gloves were available at Home Depot, and they began going through hours of surveillance video from Home Depot locations in and around Austin. They got a hit: security video from one store appeared to show the same suspect.

Officials had now whittled down the number of potential licence plates and began tailing a handful of people. One of them turned out to be Mark Conditt – the man that the authorities now believe was the Austin serial bomber. In a matter of hours, Conditt’s bombing spree, as well as his life, would be over.

As swat officers closed in, Conditt – a 23-year-old man from the Austin suburbs with no criminal record – ignited one of his homemade devices from inside his vehicle early on Wednesday and killed himself before he could be apprehended.

The dramatic and deadly trail of homemade explosions that left two people dead and injured four others ended in a ditch off Interstate 35 in Round Rock, with the windows of his vehicle blown out and his motive as unknown as ever.

In the hours after Conditt’s death, a portrait of the bomber, his bombs and his techniques emerged, along with the story of how he was finally stopped – the lucky breaks, investigative ingenuity and technology that helped catch one of the most elusive serial bombers in recent decades.

By the end of the day Wednesday, police had another tool: A 25-minute confession, left on the suspect’s phone, in which he attempted to describe his odyssey. “It is the outcry of a very challenged young man talking about challenges in his personal life that led him to this point,” the Austin police chief, Brian Manley, said.

Interviews with political leaders briefed on the inquiry, along with briefings from investigators and a federal law enforcement source, shed light on an investigation that saw hundreds of federal agents descend on Austin, gathering and reconstructing bomb fragments, interviewing witnesses and gathering video footage. “We haven’t seen an effort like this in many, many years,” said Christopher H Combs, special agent in charge of the FBI’s office in San Antonio.

Conditt’s suicide left more questions than answers about who he was, how he became a bomb-maker and why he did it. But Manley seemed to ease worries about more bombs when he said all seven had been accounted for. Law enforcement officials had worried that Conditt might have placed or sent additional bombs in the hours before he died. And officials said they were still looking into whether Conditt had any accomplices.

In the Austin suburb of Pflugerville, where Conditt grew up and lived, a steady fear persisted throughout the day, even after his death. Neighbours were forced to evacuate from the area surrounding the house Conditt shared with two roommates after investigators found explosive materials there. They were allowed to return late in the day.

The Austin police said they had questioned Conditt’s two roommates. One had been released; the other was still being questioned as of Wednesday afternoon. Neither roommate was identified. Outside Conditt’s parents’ home in Pflugerville, Detective David Fugitt with the Austin police said Conditt’s family was co-operating and was allowing investigators to search the property, including several backyard sheds.

“We don’t have any information to believe that the family had any knowledge of these events,” Fugitt said.

Pflugerville is a tranquil Austin suburb nearly 20 miles northeast of downtown. It is a spacious town of 59,000 that has long made its unusual name with the silent first letter part of its charm, as visitors notice when they pass such businesses as Pfast Lube. At times on Wednesday, Conditt’s hometown was transformed. Military-style swat vehicles sped down the wide avenues. Neighbours and friends said they were stunned that Conditt was the serial bomber.

Conditt was a home-schooled student who had attended Austin Community College. He described himself on a blog as “not that politically inclined” but expressed conservative views on issues like same-sex marriage and the death penalty. Friends and neighbours described him as a loner.

“He was a nerd, always reading, devouring books and computers and things like that,” said Donna Sebastian Harp, who had known the Conditt family for nearly 18 years. “He was always kind of quiet.”

The attacks began when a package bomb detonated on the porch of an Austin home, killing Anthony Stephan House (39). That was followed 10 days later by two bombs that were found outside homes, one of which killed a 17-year-old boy. The first three bombs were apparently detonated when they were picked up or jostled. Later, on Sunday, a package bomb exploded in the Travis Country neighbourhood, set off by the tripwire. The fifth explosion occurred at a FedEx centre in Schertz, outside San Antonio on Tuesday. Another bomb, this one unexploded, was found at another FedEx facility in Austin the same day.

“We do not understand what motivated him to do what he did,” Manley told reporters. In a mere 19 days, the bombing sprees sparked fear across the Austin and San Antonio regions of central Texas, evoking the nowhere-is-safe quality of the anthrax mailings of 2001 and the Washington-area sniper attacks of 2002.

For a young man of 23 who did not complete a degree from Austin Community College, his devices and shifting methods as a serial bomber left some of the country’s most experienced federal explosives experts baffled early on in the investigation.

And yet, that change in his tactics is largely what led police to him. His first three bombs were hidden in packages that were not mailed but instead placed on people’s doorsteps. His fourth was set off using a tripwire across the Travis Country pavement. But his fifth was different – he shipped it from the FedEx store, which captured him on security video, wearing a baseball cap and a black T-shirt and standing at a counter, in addition to other surveillance video from the area.

He shipped two package bombs there, and when one of them accidentally exploded at a FedEx centre in Schertz, investigators traced the shipments back to the FedEx store, and, ultimately, to him.

After that explosion at the FedEx facility in Schertz, investigators had turned Conditt from a person of interest into the primary suspect. “Maybe for about 24 hours before his death, they were able to closely monitor him and his movements,” Texas governor Greg Abbott told reporters.

Conditt’s vehicle was traced to a hotel in Round Rock, just north of Austin, Manley said, where a swat team surreptitiously surrounded the hotel and called other specialised units. But the suspect drove away before those teams could arrive. Officers followed the suspect, who stopped in a ditch off Interstate 35, and swat officers approached the vehicle on foot.

“The suspect detonated a bomb inside of the vehicle, knocking one officer back” and slightly injuring him, the police chief said. Another officer fired his gun at the vehicle. And investigators began the long process of trying to find the answer that wasn’t in the surveillance video: Why. – New York Times

1 US passengers fly into Dublin: ‘I’m here for six days. I guess I’ll have to stay inside’
2 Travel rules unlikely to include mandatory quarantine or cancelled flights
3 California shuts down again as US coronavirus cases surge
4 Covid-19: 200 to 250 people arriving in Ireland from US daily - Coveney
5 Cowen under pressure to answer further questions on gardaí encounter
Real news has value SUBSCRIBE