Netherlands and Luxembourg join Ireland as wary of digital tax 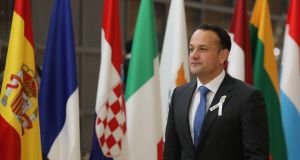 Ireland was joined by the Netherlands and Luxembourg, among others, in expressing strong reservations over new plans by the European Commission to tax digital companies.

European Council president Donald Tusk said at a press conference at the EU summit in Brussels that their discussion had “confirmed all leaders’ desire to work for an effective and fair solution” to the challenge of taxing digital profits.

He said the debate would resume in June when a decision would be taken – with unanimity voting meaning it is unlikely to be approved.

The US decision to exempt EU steel and aluminium from new tariffs came as great relief to EU leaders as they gathered in Brussels but somewhat undermined the case being made by Ireland over the tax issue.

Taoiseach Leo Varadkar had been ready to cast the commission’s new proposals, and what he said was the “targeting” of US businesses, as likely to be perceived as an escalation of that trade war, concerns the Germans have also expressed in recent days.

“I think it targets US companies and that will no doubt result in a reaction from the United States, they have already indicated that,” he told reporters.

Commission president Jean Claude Juncker denied that the tax was anti-American, pointing out that only a third of the 120-150 digital giants likely to be targeted were US-based.

Mr Varadkar’s main emphasis, however, was to stress the need not to undermine EU competitiveness with a “flawed” tax and to work for global solutions through the OECD.

“It is also based on where sales occur rather than where profits are made or value is created,” Mr Varadkar told journalists. “So there are a number of problems that arise with it and also it is proposed only to happen on a European basis and most countries believe that if we are going to do something like this we should do it on an OECD basis or a G20 basis. There is no point in Europe proposing a tax on itself that may only hand an advantage to countries that are not in the European Union or even countries that are leaving the European Union.”

The leaders were expected to offer their strong support to the UK over the Salisbury nerve agent attack, condemning it in “the strongest possible terms”. The draft conclusions, to be ratified over dinner, said they “took extremely seriously the UK government’s assessment that it is highly likely that the Russian Federation is responsible”, a formulation that fell short of direct attribution of responsibility – Greece remains “unconvinced” by the evidence.

Greek prime minister Alexis Tsipras’s call to Russian president Vladimir Putin to congratulate him on his re-election raised eyebrows at the summit.

The conclusions warned that the attack “constitutes a security threat to us all” and member states would co-ordinate their responses in the light of Russian answers to questions.

The summit also expressed concern at the data protection issues raised by the Cambridge Analytica affair. “It was clear to all the leaders that citizens’ privacy must be fully protected,” Mr Tusk said. “EU and national legislation must be respected and enforced.”