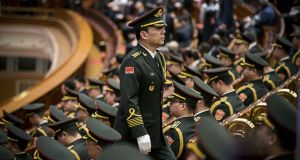 Members of China’s People’s Liberation Army band at the National People’s Congress at the Great Hall of the People in Beijing on Tuesday. President Xi Jinping has pledged to make the army a world-class military force by 2049. Photograph: Giulia Marchi/Bloomberg

China is developing unmanned tanks driven by remote control as part of its modernisation plans for the People’s Liberation Army, state media reported, and the project has entered testing stage.

China’s China Central Television’s (CCTV) military channel recently broadcast footage of the Type 59 tank being driven by a soldier using an independent computer terminal, and experts said the vehicle could be equipped with artificial intelligence.

“A large number of due-to-retire Type 59 tanks can be converted into unmanned vehicles if equipped with artificial intelligence,” Liu Qingshan, chief editor of the publication Tank and Armoured Vehicle, told the Global Times.

“They will also be capable of continuous combat with greater speed and higher lethality,” Mr Liu said.

China’s efforts to build their own domestically produced aircraft carriers, stealth fighter-bombers and to improve their missile capabilities featured strongly at this year’s parliament, the National People’s Congress, which ended on Tuesday.

President Xi Jinping has pledged to make the People’s Liberation Army (PLA) a world-class military force by 2049, the year the People’s Republic of China celebrates its centenary.

The parliament approved a military budget of 1.11 trillion yuan (€140 billion) for the coming year, a rise of more than eight per cent on the previous year.

The development of unmanned military technology combines two of the government’s stated targets of modernising the military and boosting homegrown innovation.

It’s the first time a China-made unmanned tank has been unveiled to the public. Unmanned tanks will be able to work on other autonomous platforms, and will also be able to integrate information sourced from surveillance satellites, planes or submarines.

The PLA is trying to develop “contactless combat” aided with aggressive intelligent weapons, and it is also working on developing unmanned battleships, fighter planes and combat helicopters, as well as armed drones.

Last month it was revealed that China is building a vast test site for autonomous ships near Zhuhai in the southern province of Guangdong.

It has had strong sales overseas for the Wing Loong reconnaissance-strike drone developed in China.

Strains are growing with neighbours in the region over China’s territorial disputes in the South China Sea and its rising military prowess, and also increased pressure from PLA generals to compete with the US for regional military presence.

China’s defence budget is about one-quarter of that of the US, and as it points out to critics, spending is focused on defence – China has not fought a war since an incursion into Vietnam in 1979.