Who is Brendan Boyle, the US congressman intervening on Brexit? 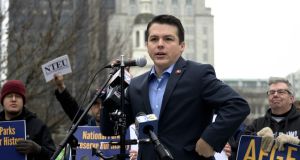 US representative Brendan Boyle speaks during a non-partisan rally protesting against the government shutdown in Philadelphia on January 8th. Photograph: Bastiaan Slabbers/NurPhoto via Getty Images

On Tuesday, US congressman Brendan Boyle introduced a resolution in Congress outlining opposition to the establishment of a hard border between Northern Ireland and the Republic. It reflected growing concern among Irish-Americans on Capitol Hill about the direction Brexit is taking, and how it might threaten the Good Friday Agreement.

The Democratic congressman told The Irish Times that Tuesday’s vote in the British House of Commons to reopen the withdrawal agreement with Brussels had underlined the urgency of the issue.

“I felt that this was the right time for the US Congress to state publicly what many of us have been saying privately for some time,” he said. “The Good Friday [Belfast] Agreement is one of the great foreign policy achievements of the 20th century. It eliminated the hard border that then existed between Northern Ireland the rest of Ireland. Now Brexit threatens this.”

Boyle (41), the son of an emigrant from Glencolmcille in the Donegal Gaeltacht, became the only member of Congress with an Irish-born parent after his election to the House of Representatives in the 2014 midterm elections in a Democratic stronghold covering Philadelphia and its suburbs. After the electoral map was redrawn Boyle became the representative of Philadelphia’s 2nd district this year.

After agreeing to the Irish backstop, Theresa May’s government has now reneged on it. Why would anyone negotiate with her now? #Brexit

Dad immigrated to America when he was 19. Spent the next 50 years working in a warehouse and as a custodian. This week he attended the swearing-in ceremonies of both of his sons. Both @RepKevinBoyle and I know we wouldn’t be where we are without his hard work & sacrifice. pic.twitter.com/7yXRkBjaFH

Following his 2014 election Boyle paid tribute to his father Frank, a janitor on Philadelphia’s rail transit system. His late mother, Eileen, the child of Irish immigrants from Co Sligo, worked as a Philadelphia School District crossing guard for more than 20 years. Boyle’s brother Kevin has been a member of Pennsylvania’s House of Representatives since 2010. The two were the only brothers to serve together in the history of the state assembly.

Underlining his sense of gratitude towards his roots, Boyle has pinned a tribute to his Twitter timeline: “Dad immigrated to America when he was 19. Spent the next 50 years working in a warehouse and as a custodian. This week he attended the swearing-in ceremonies of both of his sons. Both @RepKevinBoyle and I know we wouldn’t be where we are without his hard work & sacrifice.”

Boyle’s intervention this week adds another dimension to the Brexit debate, given the UK’s eagerness to thrash out a bilateral trade agreement with the US after Brexit. After Tuesday’s vote in the Commons, Boyle expressed scepticism at prime minister Theresa May’s strategy towards the backstop. “After agreeing to the Irish backstop, Theresa May’s government has now reneged on it. Why would anyone negotiate with her now? #Brexit,” he tweeted.

Congress will have a key role in approving any future US-UK trade deal after Brexit. Massachusetts congressman Richard Neal, who was centrally involved in the Good Friday Agreement and is the co-chairman of the Friends of Ireland caucus on Capitol Hill, has recently been appointed head of the Ways and Means committee that will oversee any future trade agreement.

Boyle made his position clear on Tuesday. “A hard border would eliminate the free flow of people between Northern Ireland and the Republic of Ireland, which has proved fundamental to promoting peace and unity,” he said in a statement. “We must not go backwards.”