Donald Trump hits out at ‘naive’ US intelligence chiefs 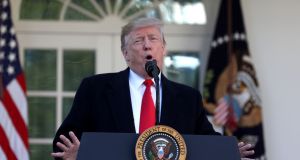 President Donald Trump hit out at US intelligence chiefs on Wednesday, a day after senior officials contradicted him about key elements of foreign policy.

In a series of tweets he said that members of the intelligence community were “extremely passive and naive when it comes to the dangers of Iran” and described their thinking as “wrong”.

“When I became President Iran was making trouble all over the Middle East, and beyond,” he tweeted. “Since ending the terrible Iran Nuclear Deal, they are MUCH different, but a source of potential danger and conflict.”

He continued: “They are testing Rockets (last week) and more, and are coming very close to the edge. There [SIC]economy is now crashing, which is the only thing holding them back. Be careful of Iran. Perhaps Intelligence should go back to school!”

Mr Trump’s tweets were delivered after the country’s top intelligence chiefs delivered a report to Congress on Tuesday about the global threats facing the United States, including assessments that appeared to contradict Mr Trump.

Director of National Intelligence Dan Coats, who oversees the country’s intelligence agencies, told the Senate Intelligence Committee that officials “do not believe Iran is currently undertaking activities we judge necessary to produce a nuclear device”.

Mr Trump pulled the United States out of the Iran nuclear deal last year which had been negotiated by his predecessor Barack Obama claiming that Iran was not living up to its side of the agreement.

The so-called Joint Comprehensive Plan of Action (JCPOA) eased sanctions on Iran in exchange for the country curbing its nuclear activity.

The view of the intelligence agencies – that Iran is not taking steps to prepare a nuclear bomb – was one of several points on which intelligence chiefs appeared to disagree with the president in their hearing on Tuesday.

Ahead of a planned summit between Mr Trump and North Korean leader Kim Jong-un next month, Mr Coats said that Pyongyang is “unlikely to completely give up its nuclear weapons and production capability” and that the country’s leaders “ultimately view nuclear weapons as critical to regime survival”.

Meanwhile, senior members of Congress met for the first time on Wednesday for negotiations designed to avoid another government shutdown when spending bills expire on February 15th.

As part of a deal endorsed by Mr Trump last week to temporarily end a 35-day government shutdown, a bipartisan committee of congress members have been charged with finding a solution to the ongoing impasse.

The key stumbling block to a long-term spending deal is Mr Trump’s demand for a border wall with Mexico. The president is demanding $5.7 billion in funding for a barrier on the Southern border. In exchange he has offered to extend the DACA (deferred action on childhood arrivals) programme that protects “dreamers” – young people who were brought to the United States as children as well as other categories of immigrants.

“If the committee of Republicans and Democrats now meeting on Border Security is not discussing or contemplating a Wall or Physical Barrier, they are Wasting their time!” Mr Trump wrote on Twitter as the group prepared to meet on Capitol Hill.

The president’s use of the phrase “physical barrier” could suggest that he is open to a border measure that falls short of a concrete wall.