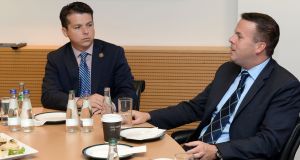 Congressman Brendan Boyle (left) has introduced a resolution outlining opposition to a hard border in Ireland.

A resolution opposing the re-imposition of a hard border in Northern Ireland has been introduced in the US Congress amid growing concern among the Irish-American caucus on Capitol Hill about the direction of Brexit.

Congressman Brendan Boyle introduced a resolution on Tuesday, outlining opposition to the establishment of a hard border between Northern Ireland and the Republic.

“One of the great foreign policy achievements of the twentieth century was the Good Friday Agreement (GFA). Brokered by US Special Envoy George Mitchell, and agreed to by the UK, Republic of Ireland, and leading parties in Northern Ireland, it eliminated the hard border that then existed between Northern Ireland the rest of Ireland. Now Brexit threatens this,” he said.

“A hard border would eliminate the free flow of people between Northern Ireland and the Republic of Ireland, which has proved fundamental to promoting peace and unity.”

He continued: “We must not go backwards.”

Members of the Irish-American caucus in the US Capital are watching events in London closely, and several have indicated that a return to a hard border in Ireland must be avoided at all costs.

In particular, Richard Neal, the Massachusetts Congressman who was centrally involved in the Good Friday Agreement and is the co-chairman of the Friends of Ireland caucus on Capitol Hill, has recently been appointed as head of the powerful Ways and Means committee. This committee will play a key role in overseeing any future trade agreement between Britain and the United States after Britain leaves the European Union.

The promise of a bilateral trade agreement between Britain and the United States is a central plank of Britain’s post-Brexit economic policy given that British exports to the United States are worth about 100 billion pounds to the British economy.

Though US president Donald Trump supports Brexit he has given mixed messages about the viability of an EU-US trade deal in recent months.

In November, he said that the withdrawal agreement negotiated by Theresa May with the EU meant that the UK may not be able to trade with the United States after it leaves the European Union