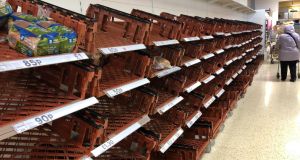 The consortium said retailers typically stored no more than two weeks’ inventory and it became difficult to restock stores if the supply chain was disrupted. Photograph: Matt Cardy/Getty Images

A no-deal Brexit could leave supermarket shelves empty and drive food prices higher, the country’s leading supermarket chains have told MPs. The British Retail Consortium said that nearly a third of the food eaten in Britain comes from the European Union and that supply chains would be seriously disrupted by a no-deal Brexit.

The consortium includes the heads of Sainsbury’s, Marks & Spencer, Asda and Lidl, as well as fast food chains such as McDonald’s and KFC. They said retailers typically stored no more than two weeks’ inventory and it became difficult to restock stores if the supply chain was disrupted.

“We are also attempting to find alternative supply routes, but there are limited options and not enough ferries, so this could only replace a fraction of the current capacity. We are extremely concerned that our customers will be among the first to experience the realities of a no-deal Brexit. We anticipate significant risks to maintaining the choice, quality and durability of food that our customers have come to expect in our stores, and there will be inevitable pressure on food prices from higher transport costs, currency devaluation and tariffs,” they said.

The prime minister’s official spokesman said the government would work with supermarkets and their suppliers to ensure there would be no food shortages.

“The government has well-established ways of working with the food industry to prevent disruption and we are using these to support preparations for leaving the European Union,” he said.

Health secretary Matt Hancock told a parliamentary committee on Monday that the government would prioritise medical supplies over food if there were delays at Dover and Calais, drawing condemnation from the opposition.

“The fact that the health secretary is forced to make decisions over whether to prioritise medicine over food in the event of a Tory no-deal Brexit is simply astonishing,” Labour’s shadow health secretary, Jonathan Ashworth, said.

“And it’s all the more irresponsible that Theresa May stubbornly refuses to rule out no deal. Playing Russian roulette with the national interest and putting people’s health at risk like this is shameful and scandalous.”

MPs on Tuesday will debate how to proceed with Brexit following their overwhelming rejection of Theresa May’s deal earlier this month. A number of amendments seek to rule out a no-deal Brexit, one of them by extending the article 50 negotiating period if the prime minister fails to win the backing of MPs for a Brexit deal by February 26th.