Cushions found on French beach believed to be from missing aircraft 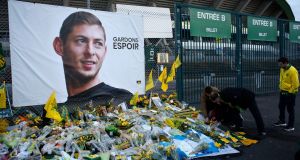 The first suspected pieces of wreckage from the plane that vanished with footballer Emiliano Sala on board have washed up on the French coast.

Two pieces of seat cushion believed to be from the plane that went missing nine days ago were found on the Normandy coast, about 32km from the last known position of the aircraft.

It has also emerged that the UK aviation investigators have identified a “priority search area” of about four square nautical miles where they believe the wreckage of the plane may lie and have commissioned a ministry of defence salvage and marine operations team to try to locate it. The start of this operation is being delayed by poor weather.

In a statement, the Air Accidents Investigation Branch (AAIB) said: “On the morning of Monday January 28th, we were advised by the Bureau d’Enquetes et d’Analyses, the French safety investigation authority, that part of a seat cushion had been found on a beach near Surtainville on the Cotentin peninsula.

“A second cushion was found in the same area later that day. From a preliminary examination, we have concluded that it is likely that the cushions are from the missing aircraft.”

Shipwreck experts hired by Sala’s family with the help of hundreds of thousands of pounds of donations have been preparing to launch their own search.

This week they revealed they were planning to use a remotely operated vehicle to comb an area of about 25sq nautical miles and they believed there was a good chance of finding the plane, which vanished on Monday last week over the Channel Islands en route from Nantes in France to Cardiff.

The official search for Sala and the pilot, Dave Ibbotson, was led by the Guernsey harbourmaster, Capt David Barker, but was terminated last Thursday.

On Monday, a week after the aircraft vanished, members of Sala’s family chartered a plane and retraced the flight path of the lost aircraft to try to help them build a picture of what happened.

Two fishing boats have searched the area just north of Guernsey where contact with the plane was lost.

The family’s expert, David Mearns, said a search vessel was being mobilised and was expected to be in the area by the end of the week, though poor weather conditions meant it may be delayed until the weekend. – Guardian