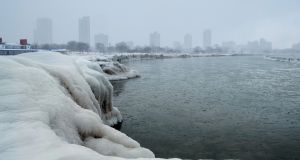 The Chicago city skyline is seen from the North Avenue Beach at Lake Michigan on Tuesday. Photograph: Pinar Istek/Reuters

A large swath of the United States was gripped by brutal cold and wind chills on Wednesday as record-low temperatures caused by a blast of Arctic air moved across the Midwest and into Eastern states, prompting residents to stay indoors.

Classes were cancelled on Wednesday and Thursday in Chicago, home of the nation’s third-largest school system, and police warned of the risk of accidents on icy highways. The US Postal Service temporarily set aside its credo about carrying mail regardless of “snow nor rain ... nor gloom of night”, and halted deliveries from parts of the Dakotas through Ohio.

Temperatures in parts of the Northern Plains and Great Lakes plunged to as low minus 41 degrees Celcius in Park Rapids, Minnesota, and minus 35 degrees in Fargo, North Dakota, according to the National Weather Service.

Andrew Orrison, a meteorologist with the service, said the some of the coldest wind chills were recorded in International Falls, Minnesota, at minus 48 degrees. That’s significantly more frigid than an expected low of minus 33 degrees with wind chill in Antarctica.

“Really today is going to be the absolute coldest across the Northern Plains and across the Midwest ... stretching down into the Ohio Valley as well,” Mr Orrison said. “Moving forward here, we are going to see a decent amount of this cold air move through the East Coast.”

The bitter cold is being carried by the polar vortex, a stream of air that spins around the stratosphere over the North Pole. Its current has been disrupted and it is now pushing south.

An Illinois police department found a fictitious cause for the icy blast, posting on Facebook that its officers had arrested Elsa, the frosty character from the Disney movie Frozen, for bringing the Arctic air to the Midwest.

The McLean Police Department shared a staged photo of officers putting a woman dressed in a blue princess gown in pink handcuffs and escorting her into a police car.

With officials in Midwest and the Northern states advising residents to stay indoors, dashcam footage from one trucker taken outside Grand Rapids, Michigan gave a snapshot of hair-raising driving conditions.

“I about just got caught in a giant wreck; cars are into other pickups, there’s people hurt. I gotta let you go,” Jason Coffelt is heard saying in an Instagram post on Tuesday, as his truck is forced off the highway and pulls up just before a multi-vehicle accident.

More than 2,000 flights were cancelled early on Wednesday, largely out of Chicago O’Hare and Chicago Midway international airports, the flight tracking site FlightAware.

Train service Amtrak said it would cancel all trains in and out of Chicago on Wednesday.

Most federal government offices in Washington DC opened three hours late on Wednesday due to the freezing conditions. – Reuters