Maduro accuses US of trying to seize Venezuela’s oil 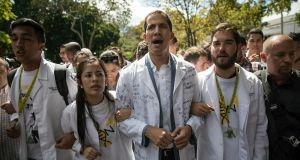 Venezuela’s president, Nicolás Maduro, has accused Donald Trump and a “group of extremists around him” of plotting to topple him in order to seize Venezuela’s oil, and warned he risked transforming the South American country into a new Vietnam.

In a four-minute Facebook video – published as Venezuela prepared on Wednesday for a day of fresh pro-opposition protests – Mr Maduro claimed the leaders of the US “empire” were conspiring “to get their hands on our oil – just like they did in Iraq and in Libya”.

Unable to accuse Venezuela’s government of stockpiling weapons of mass destruction, they were instead waging a media campaign of fake news to justify intervening in a country that boasts the world’s biggest crude reserves, Mr Maduro claimed.

“We will not allow a Vietnam in Latin America. If the US intends to intervene against us they will get a Vietnam worse than they could have imagined. We do not allow violence. We are a peaceful people,” Venezuela’s embattled leftist leader added.

“I ask that Venezuela be respected and I ask for the support of the people of the US so there isn’t a new Vietnam, least of all here in our America.”

In the video, Mr Maduro painted himself as an “admirer” of the US who had visited Boston, Philadelphia, Baltimore, New York and Washington and wanted closer relations with the White House. “The United States is so much bigger than Donald Trump, so much bigger,” he said.

But Mr Maduro looks unlikely to repair relations with the Trump administration, which has thrown its full weight behind his rival to the presidency, Juan Guaidó.

In a telephone call on Wednesday, Mr Trump reaffirmed his support for Mr Guaidó, and the two men agreed to stay in regular contact, according to the White House.

On Monday, Mr Trump stepped up his battle against Mr Maduro by announcing sweeping sanctions against the country’s state-owned oil company, PDVSA.

Mr Maduro also said on Wednesday he was willing to negotiate with Mr Guaidó. “I’m willing to sit down for talks with the opposition so that we could talk for the sake of Venezuela’s peace and its future,” he said.

Mr Maduro said the talks could be held with the mediation of other countries, naming Mexico, Uruguay, Bolivia, the Vatican and Russia.

Mr Lavrov called on Mr Guaidó to agree to talks without preconditions.

“We welcome the Venezuelan president’s willingness to accept such international [mediation] efforts,” he said at a press conference in Moscow, according to Interfax. “We call on the opposition to display an equally constructive approach, retract the ultimatums, and act independently, guided above all by the Venezuelan people’s interests.”

Moscow has so far offered full-throated support for the Venezuelan leader. Russia has invested an estimated $17 billion (€15 billion) in Venezuela by refinancing the country’s debt, as well as through oil and arms deals.

Guaidó, a 35-year-old former student leader and head of Venezuela’s opposition-run national assembly, has been in the forefront of a renewed attempt to force Mr Maduro from power since last week when he declared himself Venezuela’s rightful interim president in a daring challenge to the incumbent.

Venezuela’s supreme court has imposed a travel ban and financial restrictions on Guaidó, including freezing his bank accounts.

At the start of a two-hour protest on Wednesday afternoon, hundreds of students gathered outside the gates of the Central University of Venezuela in Caracas. Professors gave civics lectures to the assembled students, while riot police who almost matched their numbers, watched from a distance.

Rafaela Requesens, a student activist whose brother was imprisoned after taking part in street protests in 2017, said: “This is the moment to fight for democracy. We do not seek confrontation, but rather that the police and military join this struggle. This is not a fight between Chavistas and the opposition; this is a fight for Venezuela.”