A blast of polar air brought dangerously low temperatures to much of the US Midwest, causing deaths, halting the mail and forcing residents who pride themselves on their winter hardiness to huddle indoors. 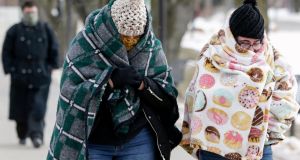 Pedestrians bundle up in sub-freezing temperatures on the campus of the University of Nebraska-Omaha on Wednesday. Photograph: Nati Harnik/PA

A wave of Arctic air that paralysed the US Midwest and caused at least a dozen deaths swept across the country’s Northeast on Thursday but was expected to move along by the weekend, making way for warmer weather.

The prospect of a weekend break offered little comfort to those enduring icy conditions, brutal winds and temperatures as low as minus 37 degrees Celsius in the Midwest and minus 16 degrees on the east coast, according to the National Weather Service.

In Washington, where the low hit minus 12 degrees and was expected to peak at minus four, a small crowd of tourists braved the cold to take pictures outside the White House.

“We’re from a hot country ... Heavens, it’s very cold,” said Vijen Nadasan (49), from Johannesburg, South Africa, who planned to spend the day sightseeing with his wife and daughter. “We’ve got to fight it out, right? Stay warm as much as possible and fight it out.”

The bitter cold was due to a southward displacement of the polar vortex, a stratospheric wind pattern that normally swirls over the North Pole.

In Minnesota and Upper Michigan, people battled temperatures as low as minus minus 31 degrees, said Andrew Orrison, a weather service forecaster.

Central and northern Wisconsin had weather of minus 29, and parts of northern Illinois, including parts of the Chicago area, saw temperatures between minus (minus 26 and minus 23 degrees, he said.

The cold snap brought bitterly cold weather to the east coast. The overnight low in Boston was at minus minus 21 degrees and Islip, New York, on Long Island had a record low of minus minus 16, according to the weather service.

However, relatively balmier weather was on the horizon. By the weekend, Chicago was expected to bask in snow-melting highs of about 10 degrees, along with other parts of the Midwest.

“We’re gradually seeing the core of the Arctic air mass begin to shift out to the East and up towards Canada, ” Mr Orrison said. “It’ll be a much different air mass than what we’ve seen the last couple of days.”

The cold has caused at least 12 deaths since Saturday across the Midwest, according to officials and news media reports. Some died in weather-related traffic accidents, others from apparent exposure to the elements.

It has been more than 20 years since a similar Arctic blast covered a swathe of the Midwest and Northeast, according to the weather service.

More than 30 record lows were shattered across the Midwest. Cotton, Minnesota had the lowest national temperature recorded on Thursday at minus 48 degrees before the weather warmed up, the weather service reported.

US homes and businesses used record amounts of natural gas for heating on Wednesday, according to preliminary results from financial data provider Refinitiv.

In Detroit, General Motors suspended operations at 11 Michigan plants and its Warren Tech centre after a utility made an emergency appeal to users to conserve natural gas after extreme cold and a fire at a compressor station. Fiat Chrysler Automobiles NV also cancelled a shift on Thursday at two of its plants.

More than 2,100 flights were cancelled and more than 1,500 were delayed in the United States on Thursday afternoon, with nearly 1,700 of those cancellations occurring at Chicago’s O’Hare International and Midway International airports, according to the flight tracking site FlightAware.com. – Reuters