Coveney to discuss Brexit with powerful figures in Washington 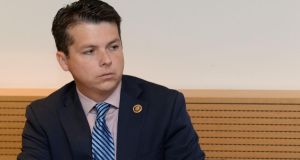 Congressman Brendan Boyle: “The Good Friday [Belfast] Agreement is one of the great foreign policy achievements of the 20th century. It eliminated the hard border that then existed between Northern Ireland the rest of Ireland. Now Brexit threatens this.” Photograph: Eric Luke

Tánaiste Simon Coveney is due to travel to Washington DC next week where he will meet key figures in the Irish-American caucus on Capitol Hill amid growing concern in Congress about the direction of Brexit.

Mr Boyle said Tuesday’s vote in the British House of Commons had underlined the urgency of the issue.

“I felt that this was the right time for the US Congress to state publicly what many of us have been saying privately for some time,” he told The Irish Times. “The Good Friday [Belfast] Agreement is one of the great foreign policy achievements of the 20th century. It eliminated the hard border that then existed between Northern Ireland the rest of Ireland. Now Brexit threatens this.”

The resolution, which was introduced on Tuesday, has now been referred to the House Committee on Foreign Affairs for consideration. It notes that the people of Northern Ireland and the Republic of Ireland voted overwhelmingly in favour of the Belfast Agreement in a referendum on May 22nd, 1998. It also highlights the fact the US is one of the guarantors of the agreement.

The motion calls for the House of Representatives to express its opposition to the imposition of a hard border, “whether one that is strongly controlled by officials, police, or soldiers, or a physical barrier, between Northern Ireland and the Republic of Ireland”.

Members of the Irish-American caucus in the US capital are watching events in London closely. And several have indicated that a return to a hard border in Ireland must be avoided at all costs, in particular, Richard Neal, the Massachusetts congressman who was centrally involved in the Belfast Agreement and is the co-chairman of the Friends of Ireland caucus on Capitol Hill. He has recently been appointed as head of the powerful Ways and Means committee. This committee will play a key role in overseeing any future trade agreement between Britain and the US after Britain leaves the EU. Two other Irish-American members of congress – Brendan Boyle and New York congressman Brian Higgins – are also members of the committee.

The promise of a bilateral trade agreement between Britain and the US is a central plank of Britain’s post-Brexit economic policy given that British exports to the States are worth about £100 billion to the British economy.

Though President Donald Trump supports Brexit, he has given mixed messages about the viability of a EU-US trade deal in recent months.

In November, he said the withdrawal agreement negotiated by Theresa May with the EU meant that the UK may not be able to trade with the US after it leaves the European Union.

Official negotiations between the US and Britain cannot begin until Britain officially leaves the bloc.

US food and pharmaceutical companies have argued that Britain needs to align more closely with US standards, particularly in the food sector, as a precondition for a trade deal post-Brexit. The office of the US trade representative published a request for input from interested parties about a potential new trade deal last November. It received approximately 130 comments from interested companies. Some called for access to US hormone-fed beef in Britain as a condition for the trade deal. Others urged the NHS to lower the barriers that prevent the national health service from sourcing more medicines from the United States.