Republicans lined up to congratulate the president on his Jerusalem move 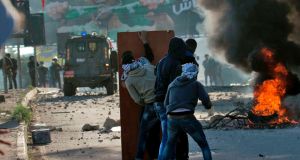 Palestinian protestors take cover during clashes with Israeli security forces at Hawara checkpoint, south of the West Bank city of Nablus, following a demonstration against US president Donald Trump’s decision to recognise Jerusalem as the capital of Israel. Photograph: Jaafar Ashtiyeh/AFP/Getty Images

On Thursday, a full-page ad took over page 11 of the New York Times. The picture featured Donald Trump wearing a kippah, hand touching the Western Wall, under the caption: “President Trump: You promised. You delivered.” Underneath, a sub-heading reads: “Thank you for courageously recognising Jerusalem’s Eternal Capital.”

The ad was placed by the Republican Jewish Coalition, a lobby group that represents Jewish Republicans in the United States.

This week’s decision by the United States to formally recognise Jerusalem as Israel’s capital and move the US embassy from Tel Aviv to Jerusalem was hailed in Israel. “The Jewish people and the Jewish State will be forever grateful,” said prime minister Binyamin Netanyahu, expressing the views of many Israelis.

But in the eyes of the world, it has also cemented the links between the United States and pro-Israel lobby that many believe will ultimately be an insurmountable barrier to achieving a two-state solution and recognising Palestinians’ right to statehood.

As world leaders condemned Trump’s decision, the reaction this week in the United States was very different. In the corridors of Capitol Hill on the day of the announcement the response was relatively muted, as members of Congress busied themselves with the ongoing tax reform negotiations and the possibility of a government shutdown.

Other Jewish groups, such as J Street and several youth Jewish organisations, also criticised the move, arguing that it will lead to further instability

On Twitter and on various news channels, Republican members of Congress lined up to congratulate Trump on his move. Democrats were also careful to underline their support for the idea of Jerusalem as the Israeli capital, even as they criticised the timing and motivation of Trump’s decision to act now.

Former Democratic presidential candidate Bernie Sanders, who is Jewish, captured the sentiment of many left-wing Jews, saying: “There’s a reason why all past US administrations have avoided making this move, and why leaders from all over the world, including a group of former Israeli ambassadors, have warned Trump against doing it – it would dramatically undermine the prospects for an Israeli-Palestinian peace agreement.”

Other Jewish groups, such as J Street and several youth Jewish organisations, also criticised the move, arguing that it will lead to further instability in the region.

As senior officials briefed the media in the White House the night before the announcement, the central question put to them was “Why?” Why is the president taking this decision now, and what is he hoping to achieve?

The president himself answered these questions in his speech on Wednesday, describing the decision as a “recognition of reality” and “the right thing to do”.

To many the real reason was rooted in domestic politics – Trump can show his supporters he is fulfilling a campaign promise, while at the same time keeping his evangelical base happy. The New York Times reported this week that several pro-Israeli donors, including Sheldon G Adelson, a casino billionaire and Republican donor, had pressed Trump to prioritise moving the embassy both before his election and in recent months.

Trump’s own family connections may have also played a part. His daughter Ivanka converted to Judaism on her marriage to Jared Kushner and her husband has been leading the White House’s Middle East policy, travelling to the region and developing relationships with both the Israeli government and regional allies like Saudi Arabia.

Both Jordan and Saudi Arabia condemned the decision, though their response was more restrained than may have been expected

Having made a point of cementing alliances with Middle Eastern countries like Jordan and Saudi Arabia in the early months of his presidency, including choosing the Gulf region as the location for his first foreign visit, Trump is risking undermining these relationships with this week’s move.

Both Jordan and Saudi Arabia condemned the decision, though their response was more restrained than may have been expected, perhaps suggesting their desire to preserve their relationship with Washington above all else.

What the announcement on Jerusalem shows, once again, is the US president’s transactional, unilateral approach to foreign policy. His willingness to ignore the nuances and complexities of one of the world’s most complex international disputes and instead favour one side in the conflict underlines his short-termism and desire to deliver for his domestic base whatever the global ramifications.

While his decision not to disclose whether the US embassy will be located in West or East Jerusalem – the area of the city claimed by Israel in the Six-Day War of 1967 – may be strategic, his claim that the new embassy will be a “magnificent tribute to peace” shows a disconnection from reality.

Once again, by taking long-term foreign policy decisions to suit his own domestic agenda, Trump is stoking up problems for years to come. His reign in Washington DC may be temporary, but the ramifications of his time in office will be felt for decades