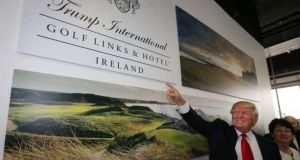 Donald Trump at the opening of the Doonbeg golf links and hotel in Co Clare. Photograph: PA

US congressional investigators have questioned whether Russian mafia money may have been used by President Donald Trump’s family business to finance Doonbeg golf resort in Co Clare.

A newly released transcript of sworn testimony given by Glenn Simpson, the former Wall Street Journal reporter whose research on Mr Trump led to a controversial dossier about his links with Russia, show that he investigated whether his Irish and Scottish golf courses were funded with Russian mafia money.

Mr Simpson’s findings are based on his suspicions based around Mr Trump’s financial statements filed in Ireland and the UK and the property developer’s alleged connections with Russian mafia figures.

The transcript was released by the House of Representatives intelligence committee which is investigating alleged ties between Trump campaign aides and Russian agents during the 2016 election based on claims by US intelligence agencies that Russia helped sway the election for Mr Trump.

Mr Simpson testified that his firm Fusion GPS, which had been hired by Mr Trump’s opponents to find damaging material on him during the 2016 campaign, investigated a claim by his son Eric Trump that the Trump Organisation had access to tens of millions of dollars in Russian funding for their golf courses.

Referring to Trump’s alleged business dealings with Russians and organised crime figures, Mr Simpson said that the president’s golf courses in Ireland and Scotland were “concerning to us”.

His firm examined financial statements filed for Doonbeg in the Companies Registration Office in Dublin and the New York property developer’s golf courses in Scotland, he said.

Mr Simpson was asked by Congressman Adam Schiff, a Democrat from California, whether he saw Russian money involved in Mr Trump’s Irish and British golf courses.

“They don’t, on their face, show Russian involvement,” he replied, “but what they do show is enormous amounts of capital flowing into these projects from unknown sources and - or at least on paper it says it’s from The Trump Organisation - but it’s hundreds of millions of dollars. And these golf courses are just, you know, sinks. They don’t actually make any money.”

Mr Simpson said that based on the suspicions around whether Mr Trump is in fact a billionaire, as the Republican president has claimed to be, there was “good reason” to believe he did not have the money for his Irish and Scottish golf courses and that he would need “outside financial support”.

He described as “fascinating” the story of Trump “financing Doonbeg in Ireland through money that we can’t really trace but has sort of the fingerprints of Russian mobsters.”

The Republican, however, questioned whether the findings of Mr Simpson’s months-long investigation into Mr Trump’s business dealings were true.

“Sometimes you do find proof of criminal activity in an investigation, but more often than not you find things that are suggestive or raise questions,” replied Mr Simpson.

Mr Rooney replied: “Right. That’s exactly my point, is that if we knew that Donald Trump was working with the Russian mafia to fund Doonbeg in Ireland, then there’s no way he would be president. So, I mean, that’s why it’s fascinating.”

Mr Trump’s Irish golf course has yet to turn a profit.

The latest accounts for the Irish company behind Doonbeg, signed off by Eric Trump and a fellow director in November 2017, show that €8.6 million was spent on improving the golf course and hotel in 2015 and 2016 and that the resort made a loss of €2.2 million on a turnover of €6.3 million in 2016.

Mr Trump bought the resort of almost €9 million in 2014, the year before he announced his candidacy for the US presidency, and promised to invest €45 million in the business.

This was the second transcript of congressional testimony by Mr Simpson to be released after he gave evidence to the US Senate’s judiciary committee.

The investigator told the House intelligence committee that there was evidence of a “well-established pattern of surreptitious contacts that occurred last year that supports the broad allegation of some sort of an undisclosed political or financial relationship between the Trump Organization and people in Russia.”