West's wealth was built up over centuries from Trump ‘sh*tholes’

Worldview: US and Europe must aid Africa and S America’s rising populations 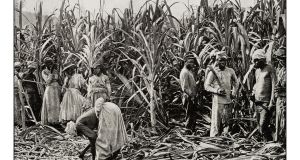 Slaves working on sugar cane plantation: a key source of wealth for the West. Photograph: Istock

“Why are we having all these people from shithole countries come here?”

Donald Trump’s question to US politicians referred to African countries, Haiti and El Salvador in particular.

One answer to his racist question is historical and another is structural. Both underline how responsible the United States – and Europe – are for the conditions driving many to flee poverty and what the most developed states can do by working with African and central American governments and peoples to counteract and manage that flow. An African Union spokeswoman said: “Given the historical reality of how many Africans arrived in the United States as slaves, this statement flies in the face of all accepted behaviour and practice.”

Writing in the Washington Post, the veteran foreign correspondent and author Howard W French powerfully argues: “More than any other factor, it is the wealth derived from Africa, especially the labour of people taken in chains from that continent, that accounts for the rise of the West and its centuries of predominance in world affairs.” This factor rather than innate qualities of rationality or achieved institutions explains its ascension over the rest of the world and the sense of superiority underlying its racisms.

By pressing its advantages, the West not only secured its own affluence, but it also set up much of the world for persistent dysfunction and economic underdevelopment

It began when Portugal extracted gold from Ghana in 1480-1500 amounting to more than double the profits of its monarchy, financing its expansion to India and Brazil and stimulating Spain to follow suit. A single silver mountain in Peru worked by slaves produced 60 per cent of the world’s supply in the 16th century, “monetising Europe and swelling its bourgeoisie, financing a trade in luxury goods from Asia and funding militarisation”, as French puts it. Sugar grown in Brazil and the Caribbean including Haiti, with mainly African slaves, followed in the 18th century, enriching Britain and France in North America and Europe.

Cotton followed sugar. Half the slaves imported from Africa arrived in the US after 1780 to grow and harvest it, driving cotton exports from 2 to 50 per cent of US exports by 1850, propelling industrialisation in Europe and funding its imperialism over the next 50 years. As French concludes: “By pressing its advantages, the West not only secured its own affluence, but it also set up much of the world for persistent dysfunction and economic underdevelopment. This is the world order that has richly benefited the United States, and which this country has presided over in large part since the middle of the last century, the life span of Trump.”

Between 2017 and 2050, the populations of 26 African countries are projected to reach at least double their current size

The structural answer to Trump’s question deals with present-day African population dynamics and migration patterns. The United Nation Population Division in its latest 2017 revision of its estimates for the world’s population by 2050 and 2100 concludes: “Africa continues to experience very high rates of population growth. Between 2017 and 2050, the populations of 26 African countries are projected to reach at least double their current size. For six African countries, the populations are projected to increase by 2100 to more than five times their current size: Angola, Burundi, Niger, Somalia, the United Republic of Tanzania and Zambia.” Nigeria’s population would grow from 191 million now to 794 million in 2100.

Fertility, life expectation and healthcare affect these overall numbers. Africa is so prominent in them because fertility is high in its youthful populations, better healthcare elongates life but the lack of birth-control education for women perpetuates high birth rates in the continent’s poorer countries, even though the rates are down to average world levels in the more developed ones.

Peter Sutherland, in his last report as UN migration special representative, took account of the likely doubling of Africa’s population by 2050 and its effects on migration to Europe. He proposed a tripartite approach between states and migrants, among states and between states and other stakeholders to tackle it. The issue is only now being addressed between the EU and the African Union in terms of investment, aid, access – and security.

One of Trump’s first acts as president was to cancel US aid for birth control facilities in Africa. As in other spheres of international affairs, Europe has an opportunity and necessity to fill the harsh policy void Trump is creating.