What was the motive for the Las Vegas massacre? 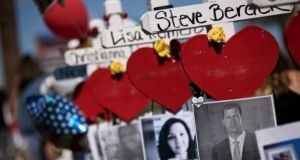 Determining a motive for the man who committed one of the deadliest mass shootings in modern history continues to be an exasperating task for investigators.

They have interviewed many of Stephen Paddock’s family members and friends and examined his travel, financial and health history but have yet to find anything that points to what drove him to kill 58 people at a concert in Las Vegas on October 1st.

On Wednesday, new information emerged that adds to the complexity of the case. Paddock apparently removed the hard drive from at least one computer found in his room at the Mandalay Bay Resort and Casino, according to a law enforcement official.

Additionally, housekeepers visited Paddock’s room, where he had fired on the crowd below, more than once in the days before the shooting, but did not notice any sign of his large stockpile of weapons. He also ordered room service at least once, according to people with knowledge of the security response inside the hotel.

Separately on Wednesday, Paddock’s brother was arrested at an assisted-living facility in Los Angeles on charges of possessing child pornography.

Paddock’s activities at the hotel have been carefully tracked. Paddock was a “lifetime winner” at MGM Resorts properties, which include the Mandalay Bay. The term refers to gamblers who have won more money than they have lost over the years, raising doubts about whether Paddock had any grievance against the hotel. He also gambled during his stay the weekend of the shooting.

Over the last year, Paddock travelled widely to buy his large cache of guns– more than two dozen were discovered in his room and more were at his home in nearby Henderson, Nevada.

Investigators have said that they were purchased legally and gunstore owners said they saw no warning signs from Paddock.

Suspects in mass shootings have typically left behind long trails to justify their actions, writing manifestoes or posting on social media. But Paddock did not appear to do so, leaving investigators from the FBI to pore over his computers and mobile phones in the bureau’s lab in Quantico, Virginia, for weeks.

Examining suspects’ computers and phones has become an essential part of criminal investigations, allowing law enforcement to retrace their steps, track their communications and identify their motives and possible accomplices. ABC News first reported that Paddock’s hard drive was missing from a computer on Wednesday.

After the massacre last year at a nightclub in Orlando, Florida, the electronic trail left by the gunman, Omar Mateen, who declared allegiance to the Islamic State during the attack and then killed himself, helped establish how he had become radicalised and planned for the attack.

The government has cited that evidence in the pending criminal case against his widow, Noor Salman, who prosecutors contend knew of his plans and lied to investigators after the killings.

The search for electronic evidence has led in unexpected directions, sometimes entangling people who were not directly involved in the crimes. In the wake of the Boston Marathon bombing, friends of one of the bombers were convicted and sent to prison for discarding his laptop and other evidence to keep it away from investigators, and lying to federal agents about it.

After a mass shooting in San Bernardino, California, in 2015, the FBI said that it was crucial for agents to examine the iPhone used by one of the suspects, and tried to force Apple to help the bureau unlock the device. Eventually, the FBI said it was able to retrieve data from the phone without Apple’s help.

Investigators have interviewed many of Stephen Paddock’s family members and it is unclear whether the brothers had been in contact. An LAPD spokesman said it was entirely a coincidence that Bruce Paddock was arrested less than a month after the shooting, adding that the investigation had been going on for months.

Police began the investigation several months ago after Bruce Paddock, who is homeless, was evicted from a business where he had been squatting. He was charged with possession of more than 600 images of child pornography and 19 counts of sexual exploitation of a child. He is being held on a $60,000 (€50,780) bail at LAPD’s metropolitan detention center. –New York Times