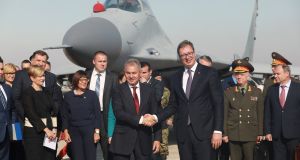 Serbian president Aleksandar Vucic and Russian defence minister Sergei Shoigu at an air show in Belgrade: Serbia is Russia’s key ally in a region where all the countries now either are or want to be EU members. Photograph: Djordje Kojadinovic/Reuters

Russia has chided the United States after a senior state department official told Serbia that it must choose between its pursuit of European Union membership and its traditionally close ties with Moscow.

On a visit to Belgrade this week, US deputy assistant secretary for European and Eurasian affairs Hoyt Brian Yee said that Serbia “cannot sit on two chairs at the same time, especially if they are that far apart”.

States that seek EU accession “must very clearly demonstrate this desire” and “choose which path to follow; regardless of how difficult it would be, the country has to make its strategic choices which must be part of official policy”, Mr Yee said.

The strongest Serbian reaction came from its defence minister, Aleksandar Vulin, who said: “Undoubtedly, this is the heaviest public and very undiplomatic pressure on our country and goes against our right to make our own decisions.

“This is not a statement made by a friend or a person respecting Serbia, respecting our right to decide independently. Serbia makes its decisions on its own, without paying attention to the importance of those who believe that they can decide for us.”

Last Friday, Mr Vulin welcomed his Russian counterpart Sergei Shoigu to Belgrade for a military show and the official unveiling of five of six MiG29 fighter jets that Moscow has donated to Serbia’s military, along with 30 tanks and 30 other armoured vehicles, in a deal that has unnerved other Balkan states.

Serbia is Russia’s key ally in a region where all the countries now either are or want to be EU members, and most have joined or aspire to join Nato.

Belgrade does not want to be part of Nato and has not joined the sanctions regime that the West imposed on Russia for its aggression in Ukraine, and Serbia is determined to pursue both EU accession and good relations with Moscow.

Russia’s foreign ministry accused Mr Yee of making “a series of provocative statements, aimed at undermining Russian-Serbian co-operation” and “in a rude way demanded that Belgrade reconsider its co-operation with Russia and concentrate exclusively on integration with the European Union”.

Noting that many EU states co-operate with Russia, the ministry said “no one should prevent Serbia sticking to such a course, based on its own national interests”.

Moscow also complained that Mr Yee had “in inappropriately emotional terms spoken against the granting of [diplomatic] immunity and privileges to the Russian-Serbian humanitarian centre in the town of Nis” in southern Serbia.

Russia says special status for its staff at the facility would aid its work in training for and tackling natural disasters and other emergencies; some western intelligence agencies suspect the centre could be a base for Moscow’s spies in the heart of the Balkans.