As long as Trump’s public support remains, Republicans will not break ranks. But their bond is purely transactional 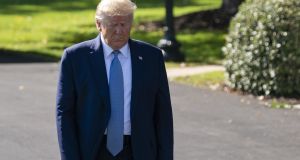 As Donald Trump’s responses to the substantive issues under scrutiny at the impeachment inquiry have shifted wildly, and as the president himself wallows in self-pity, there have been tentative signs that cannier Republicans are being careful in their positioning. Photograph: Alex Edelman/Bloomberg

Up until Tuesday, it seemed just about conceivable that the impeachment inquiry under way in the US House of Representatives could fail to produce convincing testimony that the Trump administration withheld military aid in an attempt to force Ukraine to assist with a political smear campaign. After the remarkable account given by Bill Taylor, the US ambassador to Ukraine, however, that threshold appears already to have been met.

Taylor, a career diplomat who was coaxed out of retirement by the Trump administration earlier this year, described two parallel tracks to US policy on Ukraine – a regular channel led by him and an irregular one made up largely of Trump confidantes. Within weeks of taking over in Kiev in June, Taylor said, he realised that these channels were pursuing divergent agendas.

As the president wallows in self-pity, there have been tentative signs that cannier Republicans are being careful in their positioning

At the time, Ukraine was pressing for a meeting with Trump at the White House for newly elected president Volodymyr Zelenskiy. Taylor said he learned that the granting of this meeting was conditional on the Ukrainians announcing an investigation into Burisma, an energy firm connected to Joe Biden’s son. He also testified that multiple senior administration officials told him that Trump had blocked almost $400 million in security aid until Kiev made that public pledge. It was the latter claim, originally made by the whistleblower whose complaint led to the impeachment inquiry, that convinced many Democrats in Trump-voting states to withdraw their objections to impeachment. That national security aspect is also what could make the impending proceedings in the Senate particularly awkward for Trump, and for the Republican Party itself.

On the surface, Republicans remain fully supportive of Trump – an impression that will have hardened with the stunt performed by congressional republicans on Wednesday, when they “stormed” the secure committee room where members – including Republicans – are attending the impeachment inquiry. But as Trump’s responses to the issues under scrutiny have shifted wildly, and as the president himself wallows in self-pity, there have been tentative signs that cannier Republicans are being careful in their positioning.

“The picture coming out of it, based on the reporting that we’ve seen, I would say is not a good one,” Republican senator John Thune said of the hearings. Mitch McConnell, the majority leader, openly denied Trump’s claim that he told the president that a key phone call with Zelenskiy was “perfect” and “innocent”.

As long as Trump’s public support holds firm, the Republicans will not break ranks. But their bond to the president is purely transactional. Should the voters waver in the face of the increasingly alarming testimony emerging from the inquiry, the White House will have far greater problems to contend with.