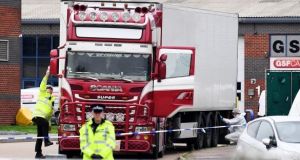 Police and forensic officers investigate the lorry in which 39 bodies were discovered in the trailer a week ago last Wednesday morning in Grays, Essex. Photograph: Leon Neal/Getty Images

The 39 migrants found dead in the back of a lorry in Essex just over a week ago are believed to be Vietnamese nationals, police have said.

Essex Police Assistant Chief Constable Tim Smith said on Friday evening: “At this time, we believe the victims are Vietnamese nationals, and we are in contact with the Vietnamese Government.

“We are in direct contact with a number of families in Vietnam and the UK, and we believe we have identified families for some of the victims whose journey ended in tragedy on our shores.”

“The confirmatory evidence needed to formally present cases to HM Senior Coroner for her consideration has not yet been obtained.

“This evidence is being gathered across a number of jurisdictions worldwide. As a result, we cannot at this time announce the identity of any of the victims.”

Mr Smith said specially trained people, supported by Vietnamese interpreters, were manning its dedicated hotline between 9am to midnight, seven days a week, for people seeking to be in touch about the incident.

In a statement, the Vietnamese Embassy in London sent its “heartfelt condolences” to the families of the victims.

It said it was “deeply saddened” that Essex Police’s initial findings were that the victims may be Vietnamese.

“Specific identities of the victims still need to be identified and confirmed by the relevant authorities of Vietnam and UK,” the embassy said.

Its statement added: “The Embassy of Vietnam in London will closely co-ordinate with the relevant authorities of Vietnam and UK to support the families of the Vietnamese victims, if any, to bring their loved ones home.”

Essex Police initially believed the 39 dead were all Chinese nationals.

It is not yet known when the victims entered the trailer, where temperatures can be as low as -25C if the fridge is activated, or the exact route it travelled before crossing from Zeebrugge in Belgium to Purfleet in the UK last week.

1 O’Doherty and Waters ordered to pay legal costs of case against State over Covid-19 laws
2 Donald Trump is in trouble, and that could spell very bad news
3 Taoiseach says €350 pandemic payment to be cut for some part-time workers
4 Madeleine McCann case: ‘We assume the girl is dead’, German prosecutors say
5 Strict rules on queuing as Dublin shops prepare to reopen
Real news has value SUBSCRIBE