Warnings as ‘violent tornado’ touches down in Missouri 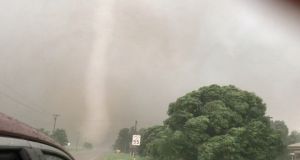 An image from a video posted on social media of a tornado in Mangum, Oklahoma. Photograph: Lorraine Matti via Reuters

A “violent tornado” has touched down in Missouri, causing possible fatalities and heavy damage, according to the US National Weather Service.

The service said a “confirmed large and destructive tornado” was observed over Jefferson City at 11.43pm local time on Wednesday, moving north east at 60km/h.

It came as a third consecutive day of dangerous storms prompted numerous tornado warnings and reports of twisters touching down, mostly in Missouri and Oklahoma.

The National Weather Service said it had received 22 reports of tornadoes by late Wednesday evening, although some could be duplicate reporting of the same twister.

One tornado skirted north of Joplin, Missouri, on the eighth anniversary of a catastrophic tornado that killed 161 people in the city.

The tornado caused some damage in the town of Carl Junction, about 6km north of Joplin airport.

Two barges broke loose and floated swiftly down the swollen Arkansas River in eastern Oklahoma on Wednesday, spreading alarm downstream as they threatened to hit a dam.

The emergency was the latest consequence of storms and torrential rains that have ravaged the Mid West, from Texas through Oklahoma, Kansas, Nebraska, Iowa, Missouri and Illinois.

Authorities urged residents of several small towns in Oklahoma and Kansas to leave their homes as rivers and streams rose.

The Arkansas River town of Webbers Falls, Oklahoma, was one such town. Town officials ordered a mandatory evacuation on Wednesday afternoon because of the river’s rising level.

On Wednesday evening, a posting on the town’s official Facebook page sounded the alarm about the runaway barges for its 600 residents: “Evacuate Webbers Falls immediately. The barges are loose and has the potential to hit the lock and dam 16. If the dam breaks, it will be catastrophic!! Leave now!!” – PA