May under pressure to quit as supporters desert her 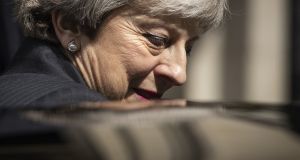 Theresa May is under pressure to resign as prime minister within days after support at Westminster for her new Brexit plan collapsed and formerly loyal Conservatives called on her to go.

Commons leader Andrea Leadsom resigned from the cabinet last night in protest against a proposal to give MPs a vote on a second referendum if they pass the Withdrawal Agreement Bill next month.

Ms Leadsom, who campaigned for Leave in the 2016 referendum, said in a letter to the prime minister that she could not support the Bill and suggested that Mrs May should step down.

“I have always maintained that a second referendum would be dangerously divisive, and I do not support the government willingly facilitating such a concession. It would also risk undermining our union, which is something I passionately want to see strengthened,” she said.

“No one has wanted you to succeed more than I have, but I do now urge you to make the right decisions in the interests of the country, this government and our party.”

Mrs May has agreed to meet Graham Brady, chairman of the 1922 Committee of Conservative backbenchers, on Friday when she is expected to outline a plan for her departure.

But after a day of feverish speculation at Westminster, the prime minister resisted calls for her immediate resignation and insisted she would press ahead with publishing the Withdrawal Agreement Bill on Friday.

Mrs May declined to meet a number of cabinet ministers who sought to express concerns about the Bill, which would put into law provisions needed to implement the withdrawal agreement.

Scottish secretary David Mundell and home secretary Sajid Javid were among the ministers reported to be concerned about the Bill’s promise of a vote for MPs on a second referendum.

Dozens of Conservative MPs who voted for the withdrawal agreement last March said they would oppose the Bill if it came to a vote.

The prime minister told the House of Commons that she planned to bring the Bill forward for its second reading in early June, saying it was her duty to help deliver Brexit.

The Bill offers MPs a vote on whether to remain in a customs union with the EU and on whether to put the withdrawal agreement to a confirmatory referendum.

But Labour leader Jeremy Corbyn said his party did not trust the Conservatives to follow through on any promises the prime minister made, adding that she lacked the authority to lead Britain.

“Throughout the last three years, she has made no attempt to unite the country. She has been focused only on keeping her divided party together. It hasn’t worked. And now her time has now run out,” he said.

The crisis surrounding Mrs May’s leadership comes as the UK votes on Thursday in European Parliament elections that are expected to see Nigel Farage’s Brexit Party take the largest share of the vote.

A BMG Research poll for the London Independent put Mr Farage’s party on 38 per cent, with the Conservatives on 12 per cent. The poll put Labour at 18 per cent, just 1 per cent ahead of the Liberal Democrats.