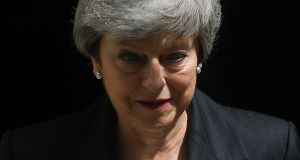 Theresa May: “The sofa is up against the door, she’s not leaving,” said former Conservative leader Iain Duncan Smith. Photograph: Daniel Leal-Olivas/AFP/Getty Images

Theresa May appeared to have won a 48-hour reprieve from the crisis surrounding her leadership on Wednesday night when Andrea Leadsom announced “with great regret and a heavy heart” her resignation from the government. The Commons leader said in a letter to the prime minister that she could not support her offer to MPs of a vote on a second Brexit referendum.

“I have always maintained that a second referendum would be dangerously divisive, and I do not support the government willingly facilitating such a concession. It would also risk undermining our union which is something I passionately want to see strengthened,” Leadsom said.

The air in the committee room corridor at Westminster was thick with anticipation two hours earlier when chief whip Julian Smith arrived to meet the executive of the 1922 Committee of Conservative backbenchers. May was holed up in Downing Street, refusing to meet cabinet ministers who wanted to talk about the Withdrawal Agreement Bill (WAB) and her future.

Had Smith come to the ’22 to tell them that the prime minister was about to resign and would make a statement to that effect later in the evening? Or would he tell the committee that May had decided not to publish the WAB on Friday, as planned, and not to put it to a second reading vote two weeks later?

In the event, Smith stayed at the meeting for just two minutes, telling the backbenchers that the prime minister would make no statement that evening and would be campaigning in the European Parliament elections on Thursday. For former Conservative leader Iain Duncan Smith, the message was clear.

“The sofa is up against the door, she’s not leaving,” he said.

In fact, the prime minister had taken the first step towards leaving, agreeing to meet 1922 Committee chairman Graham Brady on Friday, two weeks ahead of schedule. She was due to meet him after the WAB’s second reading to agree a timetable for her departure and for a leadership contest to succeed her.

She will now set out that timetable on Friday, triggering a contest that could see a new Conservative leader in place before parliament breaks up for the summer in late July.

It had been clear all day that the prime minister was in trouble as Conservatives who voted for the withdrawal agreement last March lined up to say that they could not support the WAB. In her statement to the Commons about the Bill, May struck a valedictory note.

“In time, another prime minister will be standing at this dispatch box, but while I am here, I have a duty to be clear with the House about the facts. If we are to deliver Brexit in this parliament, we will have to pass a withdrawal agreement Bill. We will not do so without holding votes on the issues that have divided us the most. That includes votes on customs arrangements and on a second referendum. We can pretend otherwise and carry on arguing and getting nowhere, but in the end our job in this House is to take decisions, not to duck them,” she said.

Some ministers complained privately that the WAB’s commitment to giving MPs a vote on a second Brexit referendum went further than what had been agreed in cabinet on Tuesday. Scottish secretary David Mundell, one of the ministers who unsuccessfully sought a meeting with the prime minister on Wednesday, was worried that the commitment could boost demands for a second referendum on Scottish independence.

The concessions on customs and a second referendum were designed to win Labour support for the WAB but Jeremy Corbyn said she no longer had the authority to make a credible offer.

“No Labour MP can vote for a deal on the promise of a prime minister who only has days left in her job,” he said.