Varadkar and EU should come clean about Border infrastructure 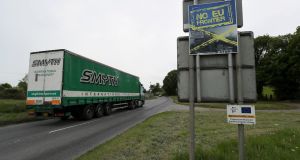 Nigel Dodds had a valid point. Albeit, perhaps not quite the point he intended to make.

The DUP MP, speaking on BBC’s Newsnight on Tuesday, rubbished suggestions that the “alternative arrangements” the UK government hopes would make the backstop provisions for the Border unnecessary, were unproven and incompatible with EU requirements for adequately securing the integrity of the single market.

These ill-defined alternative arrangements are usually seen as technological means – as yet not available – of checking goods’ movements, or controls based away from the Border in factories or farms.

“Michel Barnier himself said that in the situation of a no-deal Brexit,” Dodds said, “they would do operational checks away from the Border. So what is the argument about?” Taoiseach Leo Varadkar had said the same, he added.

Admittedly, Dodds somewhat undermined his contention that the EU would support such measures by asking Theresa May in the House of Commons on Wednesday to confirm there would be “no obligation on the EU to agree on alternative arrangements”.

Nevertheless the Taoiseach has indeed been most insistent that in a no-deal situation the Government has no intention of putting in place any physical customs infrastructure on the Border, while promising to honour its obligations to the EU to rigorously control access to its internal market.

It’s a commitment, as Dodds points out, that looks awfully like one to those same “alternative arrangements” already dismissed by the European Commission in its dealings with the UK.

Pressed, Irish officials suggest the answer to the conundrum lies in the backstop and the obligations it imposes on the UK. “The backstop is the solution,” one told me. The backstop would require the UK to maintain substantial single market rules alignment and continued membership of the customs union if it wanted to avoid Border controls on the island of Ireland.

But in a no-deal situation with no withdrawal agreement, I reply, the backstop would surely not apply? Not so, I am told: the backstop provisions are an obligation arising from the Belfast Agreement to which the UK has a legal obligation to adhere – whether or not it knows or acknowledges that yet.

Is the EU talking to the UK about what the union views as the latter’s continuing obligations in the event of a no-deal scenario? No. There are no such discussions – which, it is said, could cut across talks on the real deal – but rather a series of unilateral, reciprocated declarations from both sides about continuing to respect various rules in the event of a no-deal, such as airline safety certification and landing rights, and citizens’ rights. Nothing so far on the Border.

And it’s not that simple. When the UK made a unilateral declaration last month about being willing to keep in step with EU sanitary and phytosanitary rules for nine months after a no-deal, I foolishly wrote a report for this paper suggesting this could mean that for those nine months checks on the Border on food, animal and plant imports to the Republic would be unnecessary. A great relief, no doubt, to our food and farming industries.

Not so, I was told the next day by the European Commission: “Imports from the United Kingdom will be checked at our border inspection posts as any imports from a third country.” You mean those “border inspection posts” that we were not planning to have, and that, under EU regulations, must be as close as possible to the point of entry? Any recognition of the UK move would require detailed negotiations after its departure, I’m told.

What, it seems, the Taoiseach and Barnier were actually saying was that it was not their intention to create infrastructure on the Border, with an unspoken caveat that that would depend on the UK playing ball. A case of being slightly economical with the truth, a truth that will not provide any comfort to Nigel Dodds.

The commission has repeatedly said in recent weeks, moreover, that in a no-deal scenario the UK, if it wants to talk to the union about anything, will have to sign up first to the full, unamended withdrawal agreement – backstop, financial obligations to the EU, citizens’ rights, and all.

A commission source on Wednesday confirmed that in any interim period between the UK’s no-deal Brexit and the end of talks to confirm such an understanding – no mean task – the commission’s responsibility “would be to protect its internal market”. That means checks on the Border.

On Tuesday the Taoiseach again repeated the necessity to keep no-deal planning on track, and May’s impasse in the Commons makes that outcome ever more likely. But it’s perhaps also necessary to come clean about some of the ambiguities of our Border plans.

1 Ireland could lose out as France lays claim to most of €5bn Brexit compensation fund
2 Q&A: What restrictions are going to be lifted next week?
3 Cross-Border restrictions unlikely as Ministers meet to discuss lockdown exit
4 Miriam Lord: The Dáil's answer to John Wayne overcooks the ham slice, by slice, by slice
5 400 – yes, 400! – Irish retailers for all your online Christmas shopping
Real news has value SUBSCRIBE