Trump refuses to work with Democrats until inquiries end 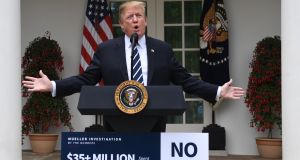 US president Donald Trump speaks in the Rose Garden of the White House on Wednesday, where he angrily rejected Nancy Pelosi’s accusation that he is engaged in a cover-up. May 22, 2019, in Washington, DC. Photograph: Jim Watson/AFP/Getty Images

US president Donald Trump walked out of a meeting with Democratic lawmakers on infrastructure and declared that he would not work with the opposition party on any policy issue until they drop their “phoney investigations” into his personal and political dealings.

Addressing reporters in the Rose Garden, Mr Trump said: “I’ve said from the beginning you can’t go down two tracks.”

The president’s remarks came after Democratic congressional leaders, including House speaker Nancy Pelosi, arrived at the White House to discuss a $2 trillion infrastructure package with the president – a deal that now appears to be off the table.

Mr Trump appeared to take particular umbrage at Ms Pelosi’s accusation earlier on Wednesday that the president was engaged in a “cover-up”.

The president’s comments highlighted the increasing tensions between Democratic lawmakers and the White House, which appears to be daring Democrats to take up the issue of impeachment – a question that has divided the party’s progressive and moderate members.

At a press conference after the aborted infrastructure meeting, Democratic lawmakers said they had been initially hopeful about working with Mr Trump on a bipartisan infrastructure package.

As I have long been saying, and has now been proven out, this is a Witch Hunt against the Republican Party and myself, and it was the other side that caused the problem, not us!

“To watch what happened in the White House would make your jaw drop,” Chuck Schumer, the Democratic Senate minority leader, said, referring to the meeting.

“The fact is, in plain sight in the public domain, this president is obstructing justice and he’s engaged in a cover-up – and that could be an impeachable offence,” she said during an event at the Center for American Progress, a liberal Washington policy advocacy group.

Democrats have been ramping up efforts to subpoena key members of Mr Trump’s circle, inciting the ire of the president. Mr Trump claimed in recent tweets that Democrats were only pursuing the investigations in a bid to win back the White House in 2020 and hurt his poll numbers.

On Tuesday evening, the House judiciary committee announced it had issued subpoenas for Hope Hicks, the former White House communications director and one of Mr Trump’s closest aides during the early days of his presidency, as well as Annie Donaldson, former chief of staff to Don McGahn, the former White House counsel who thus far has refused to testify before the committee.

Earlier on Tuesday, Mr McGahn complied with a White House directive to skip a hearing before the judiciary committee. The same committee recently voted to hold William Barr, the US attorney-general, in contempt for failing to appear at a separate hearing related to special counsel Robert Mueller’s investigation into Russian interference in the 2016 presidential election.

Democrats secured an initial win earlier this week after the a US judge ruled he would not stop Democrats from subpoenaing Mr Trump’s financial records from the president’s accounting firm.

Separately, the House intelligence committee announced on Wednesday that the US justice department has agreed to begin handing over documents relating to Mr Mueller’s investigation.

“DoJ has accepted our offer, and will begin turning over to the committee 12 categories of counter-intelligence and foreign intelligence materials beginning this week,” Adam Schiff, the Democratic House intelligence committee chairman, said.

“Our subpoena will remain in effect, and be enforced should DoJ fail to comply with the full document request,” Mr Schiff said.

The initial batch of documents was expected to be in the House intelligence committee’s hands “by the end of next week”, Mr Schiff said. – Copyright The Financial Times Limited 2019