‘Together we will build a strong and inclusive India,’ says PM as BJP set to increase majority 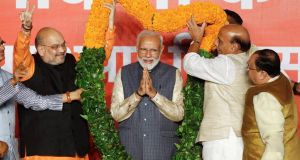 Mr Modi (68), the son of a tea vendor in western India, will be sworn into office some time next week after the election commission formally notifies the poll results and a new parliament is convened.

“Together we will build a strong and inclusive India,” Mr Modi tweeted on Thursday afternoon after it became apparent that the BJP was emerging victorious.

Calling the victory a “Modi tsunami”, BJP workers burst firecrackers, distributed sweets and danced joyously outside the party offices across India, after results collated by the election commission from some 1.7 million electronic voting machines, revealed a convincing win for their party.

According to the commission, the BJP was poised to win 298 seats, significantly more than the 272 seats required to command a majority in the 543-member Lok Sabha (elected lower house of parliament).

This number exceeded the 282 seats the BJP won in the 2014 elections, despite many analysts and media outlets predicting an electoral setback due to the BJP’s inability to stimulate India’s flagging economy, provide employment and ease countrywide agrarian distress.

The overall tally of the BJP-led National Democratic Alliance (NDA) was forecast at 347 seats, only five less than it won five years ago.

The Congress Party, on the other hand, was leading in just 56 seats, 12 more than it got in 2014, triggering rumours about the future of its leader Rahul Gandhi, a scion of the Nehru-Gandhi family that has dominated the party since its founding in 1885.

In a brief press conference in New Delhi, Mr Gandhi took responsibility for the electoral setback and also conceded defeat in his borough of Amethi in north India to a BJP rival.

But Mr Gandhi, who also contested from a second, safe seat in Wyanaad in southern India as a back-up option, is certain to be an MP as he was leading there by more than 700,000 votes.

“The Congress needs to reinvent itself and its now clear that it cannot match the BJP’s well-oiled electoral machinery,” said political analyst Yogendra Yadav. Few voters, he added, believed that the Congress or any other opposition party could deal effectively with India’s myriad problems.

The BJP’s most spectacular victories were in the western and central Indian states of Rajasthan and Madhya Pradesh, despite the Congress Party forming provincial governments there following elections last December. In Rajasthan, the BJP repeated its 2014 feat of winning all 25 parliamentary seats and it captured 28 of 29 constituencies in Madhya Pradesh.

Equally stunning was the BJP’s maiden success in eastern Bengal state, the bastion of the state’s fiery chief minister Mamta Banerjee, where it increased its seat share almost ten-fold, from two to 19 seats.

Mr Modi’s spectacular victory followed a well-co-ordinated, hi-tech and well-financed presidential-style campaign, backed by his robust oratory, all of which were on display in the more than 350 public rallies he addressed across the country from February onwards.

According to some market estimates, the BJP outspent the Congress some twenty-fold on Facebook and Google advertising, reaching out to some 900 million eligible voters via numerous social media platforms.

At his well-attended rallies Mr Modi provoked, jollied and goaded crowds by reiterating a muscular nationalism and national security policy in which he focused attention solely on himself.

In the course of some 35 rallies last month, for instance, the PM referred to himself in the third person some 171 times, the NDTV news channel revealed.

“Modi has skilfully made himself indispensable, not only to the BJP, but also to India,” said political analyst Sudip Mazumdar.

But he will be under pressure to provide employment to tens of millions of young people coming on to the job market each year, boost depressed farm incomes and assuage the fears of India’s vast Muslim minority community of Hindu domination.