UK election: Corbyn does his best to shift focus from Brexit 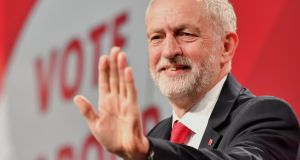 Jeremy Corbyn sought to use the official launch of Labour’s campaign to shift the general election’s focus away from Brexit and on to economic justice and public services. Speaking to supporters in Manchester, he accused Theresa May of using Brexit to distract voters from Conservative policies which hurt the poor and help the rich.

“This election isn’t about Brexit itself. That issue has been settled. The question now is what sort of Brexit do we want – and what sort of country do we want Britain to be after Brexit?” he said.

One reason for May’s success in keeping the focus on Brexit is that voters are confused about what Labour – and Corbyn himself – really think about it. The Conservatives have become the party of Brexit, capturing much of Ukip’s vote in the process, while the Liberal Democrats represent the resistance to leaving the EU. Labour has swerved all over the Brexit boulevard, giving May a blank cheque to trigger article 50 and seeking to impose conditions afterwards.

“Labour wants a jobs-first Brexit. A Brexit that safeguards the future of Britain’s vital industries, a Brexit that paves the way to a genuinely fairer society, protecting human rights, and an upgraded economy,” Corbyn said on Tuesday, avoiding any mention of the single market, the customs union or the jurisdiction of the European Court of Justice.

The Labour leader instead doubled down on his message that the general election is a contest between powerful vested interests and the people they exploit. Promising to take on the beneficiaries of what he calls a rigged system, he said Labour could transform Britain into a more equal, caring society.

“Don’t wake on up on June 9th to see celebrations from the tax cheats, the press barons, the greedy bankers, Philip Green, the Southern Rail directors and crooked financiers that take our wealth, who have got away with it because the party they own, the Conservative Party, has won. We have four weeks to ruin their party. We have four weeks to have a chance to take our wealth back,” he said.

Corbyn’s internal critics hoping they have only four weeks to put up with him as leader learned just before his Manchester speech that he has no intention of leaving, regardless of how poorly Labour performs next month. In an interview with BuzzFeed News, he made clear he has no plans to follow the example of Gordon Brown and Ed Miliband by resigning after an election defeat.

Facing a daily onslaught of criticism in the media, sniping from within his own party and collapsing poll numbers, Corbyn pronounced himself unperturbed.

“Monsieur Zen is fine,” he said.