Demonstrators chanted 'Shame on you' after the US House of Representatives approved a bill on Thursday to repeal major parts of Obamacare and replace it with a Republican healthcare plan. Video: Reuters 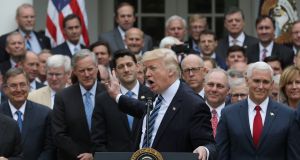 US president Donald Trump scored his first major legislative victory on Thursday as the House of Representatives voted to replace the Affordable Care Act, achieving a top goal for the Republican party since Barack Obama passed his signature healthcare measure seven years ago.

House members voted 217-213 to pass the Republican healthcare measure. While the Bill moves to the Republican-controlled Senate where it faces obstacles, the vote is a victory for Mr Trump who had ended his first 100 days in office with no big legislation.

Republicans hailed the victory as a significant step towards scrapping Obamacare, which was one of the top issues for core Republican voters in the 2016 general election. But Democrats, who are labelling the measure as “Trumpcare”, said the new Bill would raise premiums and force millions of US citizens to lose health insurance.

“Trumpcare is a billionaire’s tax cut disguised as a healthcare Bill,” said Nancy Pelosi, the top Democrat in the House. “It is Robin Hood in reverse.”

Ms Pelosi said the measure was worse than the Bill that the Republicans attempted, but failed, to pass in March in what was a humiliating defeat for Mr Trump on Capitol Hill. “Now it has come back to life like a zombie even more scary than before.”

Democrats also claim that the Republican move will end up making it more likely that the conservatives lose seats in the 2018 mid-term congressional elections. “Any Republican who votes for this Bill is painting a big bullseye on his back,” said Brendan Boyle, a Democratic congressman from Philadelphia. “The TV ads write themselves. This is a significant enough vote that could jeopardise GOP control of the House.”

The victory comes after three months of roller-coaster efforts to repeal and replace the Affordable Care Act, the formal name of Obamacare.

Insurance companies are fleeing ObamaCare - it is dead. Our healthcare plan will lower premiums & deductibles - and be great healthcare!

As Democrats and Republicans debated the Bill on the House floor on Thursday, Mr Trump tweeted that Obamacare was in a “death spiral”. The tweet followed a report that a large health insurer was pulling out of Virginia, in what the Republicans say is another example that Obamacare is collapsing on its own.

The decision to hold a vote had been a gamble for the White House. In March, the House was about to vote on a Bill when it became clear at the 11th hour that the Republicans lacked the numbers given internal divisions and unanimous opposition from Democrats.

“I simply have to believe they have the votes or they would never risk a gigantic embarrassment on the House floor – one that would define [house speaker] Paul Ryan forever and severely damage Trump,” said Larry Sabato, a University of Virginia politics professor. “Famous last words, but it’s the only thing that makes sense.”

Mr Trump was desperate for any legislative victory. While he has begun deregulation efforts and largely pursued the trade agenda he outlined on the campaign trail, he has failed to pass any of the 10 legislative goals he set for his first 100 days.

The president and his top aides spent the past few days trying to twist the arms of recalcitrant Republicans in the hope they could craft a consensus before Congress goes into recess at the end of the week.

The White House had also pinned its hopes on a repeal of Obamacare that would unlock funds that could be used to help pay for comprehensive tax reform, something Mr Trump is ultimately far more interested in achieving.

But success in the House on Thursday by no means guarantees the Bill would become law because of Republican resistance in the Senate.

“Republicans are going to try and claim momentum for the rest of their agenda but the reality is they are incredibly divided,” said Jim Manley, a former top Democrat congressional aide. “This Bill has almost no chance of getting through the Senate. Too many Republicans are opposed, so it’s going to be radically changed. I predict that conservative House Republicans won’t support the Senate revisions, which means it will ultimately die a slow, painful death.”

Republicans redrafted the Bill they pulled from the House floor in March. Arch-conservatives had argued that the original measure did not go far enough in removing the government from the health insurance system, while moderates worried about estimates that it would result in 24 million citizens losing their health insurance.

In recent days, Republicans have haggled over the extent to which the bill would ensure that people with pre-existing medical conditions would be covered – which is guaranteed under Obamacare.

The American Medical Association, which opposes the Bill, said the recently proposed changes “tinker at the edges without remedying the fundamental failing of the Bill – that millions of Americans will lose their health insurance as a direct result of this proposal”.