US Senate to hold hearing into Boeing 737 MAX 8 crashes 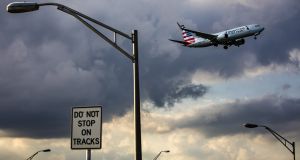 The US Senate Commerce Committee plans to hold a hearing into the fatal crashes of two Boeing Co 737 MAX 8 jets since October as a growing number of politicians called on US regulators to ground the jet.

US senators Mitt Romney and Elizabeth Warren on Tuesday called on the Federal Aviation Administration to follow several other countries and temporarily ground Boeing Co’s 737 MAX 8, days after a crash in Ethiopia killed everyone onboard one of the planes.

“Out of an abundance of caution for the flying public, the (FAA) should ground the 737 MAX 8 until we investigate the causes of recent crashes and ensure the plane’s airworthiness,” Mr Romney said in a tweet.

The FAA said late on Tuesday that its ongoing review of the 737 MAX shows “no systemic performance issues and provides no basis to order grounding the aircraft”.

Mr Cruz said it would be prudent “to temporarily ground 737 Max aircraft” until the FAA “confirms the safety of these aircraft and their passengers”. Mr Cruz added he intends “to hold a hearing to investigate these crashes, determine their contributing factors, and ensure that the United States aviation industry remains the safest in the world”.

The calls came as the European Union Aviation Safety Agency and numerous countries including Britain, China, Australia, Germany, France and Singapore have grounded the aircraft.

Ms Warren, a Democratic presidential candidate, said the FAA should “immediately ground this plane in the United States until its safety can be assured”.

Mr Romney, the Republican candidate for president in 2012, joined similar calls not only from Ms Warren, but from her fellow Democratic Senators Richard Blumenthal and Dianne Feinstein.

The FAA said foreign civil aviation authorities have not “provided data to us that would warrant action” but emphasised that if safety concerns are raised in its review it “will take immediate and appropriate action”.

Regulators around the world and a growing number of airlines are grounding the 737 MAX 8 in the wake of two fatal crashes in five months. The previous crash occurred in Indonesia in October and killed 189 people.

Sara Nelson, who heads the Association of Flight Attendants union, on Tuesday urged the FAA to temporarily ground the 737 MAX fleet, as did Consumer Reports, an influential US magazine.

“This is about public confidence in the safety of air travel,” said Ms Nelson.

Boeing in a statement on Tuesday did not directly address the senators’ comments but said it has “full confidence in the safety of the MAX” and noted the FAA has not mandated “any further action at this time”.

Boeing added it understands “regulatory agencies and customers have made decisions that they believe are most appropriate for their home markets”.

The FAA told international carriers on Monday there was no need to ground the plane but it would mandate a software upgrade and training changes by April. Boeing confirmed late on Monday that it will roll out those changes in the coming weeks.

US president Donald Trump, who has been briefed on the Ethiopian Airlines crash according to administration officials, on Tuesday tweeted that “Airplanes are becoming far too complex to fly. Pilots are no longer needed, but rather computer scientists from MIT.”

He added “complexity creates danger. All of this for great cost yet very little gain. I don’t know about you, but I don’t want Albert Einstein to be my pilot. I want great flying professionals that are allowed to easily and quickly take control of a plane!”

Trump spoke to Boeing chief executive Dennis Muilenburg on Tuesday after the tweets were issued and received assurances that the aircraft was safe, three people briefed on the call said.

White House press secretary Sarah Sanders told Fox News on Tuesday that it was “very early in the process” of deciding whether to ground the 737 MAX 8. She added the White House would be in “constant contact” with the FAA “to make determinations at an appropriate time.” – Reuters