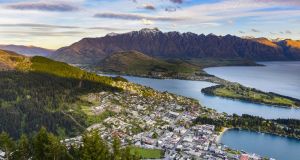 Queenstown attracts holidaymakers fro macross the world due to its combination of natural beauty and adventure sports including skiing, bungee jumping and white water rafting.

Fed-up residents of New Zealand’s biggest tourist town are pushing ahead with a plan to charge international tourists for the privilege of visiting the area.

Queenstown, situated in the picturesque southern Alps region of New Zealand’s South Island, is buckling under its own popularity, with 34 international tourists for every resident.

By comparison, the Auckland ratio is one to one and Christchurch is three to one.

The proposal echoes one in Venice, whose mayor mayor, Luigi Brugnaro, has announced an entry tax from May 1st. Each visitor will be charged between€3 and €10, depending on the time of year.

Queenstown attracts holidaymakers from across the world due to its combination of natural beauty and adventure sports including skiing, bungee jumping and white water rafting.

But house prices and rentals are among the most expensive in the country, pricing out local families and workers, and infrastructure such as roads and public amenities are overwhelmed, and environmental gems threatened.

As a result, Queenstown mayor Jim Boult wants to introduce a visitor levy, which he says will be directed towards desperately needed infrastructure to ease the burden on the district’s 24,000 ratepayers.

Mr Boult plans to hold an urgent, non-binding referendum on the charge, as tensions between locals and visitors increase.

Last year, Queenstown was visited by 3.3 million visitors, with the majority of visitors to New Zealand visiting what is commonly known as the world’s “adventure capital”.

“Queenstown Lakes has one of highest visitor-to-resident ratios in the world,” Mr Boult said.

“While Queenstown Lakes is a place synonymous with wealth and luxury, at the heart of the district are communities where people are struggling to find affordable housing and traffic is a growing challenge.”

Mr Boult said the pressure that high levels of tourism placed on the town’s infrastructure “threatens to undermine the wellbeing of our communities”.

Visitors to the region have expressed dismay at the proposed levy, saying it was already expensive to fly to New Zealand and the charge had a whiff of opportunism about it.

The plan echoes moves by central government to earn more money from record-high visitor tourist numbers, with a tourist levy of between NZ$25 (€15.14) and NZ$35 (€21.19) to be introduced to all international tourists by the end of 2019.

“If a referendum shows there is clear support for a local visitor levy, the Government will consider any necessary legislation,” Mr Twyford said in a statement.

The department of conservation, which oversees the country’s vast system of public walking tracks, recently hiked the cost of hut fees, requiring international visitors to pay double what locals do to tramp New Zealand’s nine great walks, which include the iconic Routeburn and Milford tracks.

The opposition national party have been approached for comment. – Guardian