US referendums: Win for Uber and marijuana more widely available 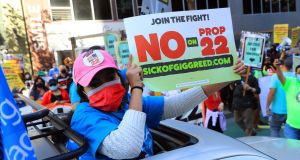 A protest against a ballot initiative that would allow Uber and Lyft to continue classifying drivers as independent contractors. The proposition was carried, curtailing the ability of drivers to claim employee rights. Photograph: Jim Wilson/The New York Times

In referendums across the US voters at state level directly engaged with a range of hot-button issues from abortion to tax policy which saw huge spending by companies like Uber and oil companies – successfully – to defend their commercial interests.

There were 124 state-wide ballot initiatives this year, down from 154 four years ago. These ranged widely from abortion, to legalising marijuana, to tax increases – or income redistribution on the ballot paper – and race-related legacy issues.

Among other questions on the ballot was one in Colorado where voters appeared likely in a close vote to back the reintroduction of gray wolves on state lands and to “pay fair compensation to owners of livestock for any losses of livestock”.

In the most expensive ballot initiative in US history, California carried a proposition that would define app-based delivery and taxi drivers as contractors rather than employees. A campaign led by Uber and Lyft and the delivery service DoorDash spent $200 million to back the proposal that would curtail the ability of drivers to claim employee rights.

Libertarian California also rejected the repeal of a previous proposition that allowed the state to use affirmative action programmes to redress perceived discrimination on racial or gender grounds in public employment, public education, and public contracting.

And it refused to endorse a constitutional change which proponents said could raise billions of dollars for schools and local governments by changing the system of valuation of property tax on large premises.

The Black Lives Matter movement cast racial legacy issues in a new light in a number of states. The official name of Rhode Island is the State of Rhode Island and Providence Plantations and voters agreed to remove the second half, seen as having slavery connotations. It had rejected the change 10 years ago.

‘In God We Trust’

In Mississippi, voters agreed to replace the state flag, the last to display the controversial and racially tainted Confederate battle cross, with one which features the state flower, the magnolia and the words “In God We Trust.”

Utah and Nebraska voters passed a measure that removes slavery as a punishment for crimes, both of which have had the provision in their state constitutions since the late 1800s.

Cannabis will now be legal for medical use in 36 states and recreational use in 15.

Nevada was set to recognise the marriage of couples regardless of gender. Colorado voters rejected a measure that would have banned abortions after 22 weeks. And in Washington State they approved an initiative requiring public schools to teach comprehensive sex education.

Arizona was close to agreeing tax measures against the rich to funnel money into public schools. An income tax surcharge of 3.50 per cent on those earning above $250,000 or couples earning more than $500,000 would come in addition to the existing 4.5 per cent income tax.

Illinois approved the repeal of laws that prevent the state from enacting a graduated income tax replacing its flat income tax of 4.95 per cent with graduated taxes that would range from 4.75 per cent to 7.99 per cent.

In Alaska, oil companies have poured millions of dollars into what looks certain to be a successful campaign to defeat a tax increase on oil extracted from the state’s North Slope. The money would have been funnelled into the state’s budget, and helped relieve the state’s deficit.