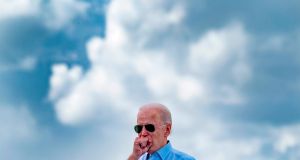 Joe Biden, a down-the-middle centrist who circumstances have conspired to make a figurehead for one of the most radical Democratic policy programmes in more than half a century, has barely had a chance to put out his stall. Photograph: Jim Watson/AFP via Getty Images

For once the cliché is true: the United States is at a turning-point. An election arguably more consequential than any in a century offers the country a binary choice that will shape this young decade in profound ways both at home and abroad. Donald Trump or Joe Biden.

This contest between two white men in their 70s is not an election battle in any traditional sense – and not only because it takes place in the midst of a once-in-a-century pandemic that has already, due in part to calamitous political mismanagement, caused the deaths of almost 230,000 Americans. This has been a contest in which little has turned on policy disputes, where campaign strategy has been less important than it would ordinarily be, and the economy less decisive. Indeed, the incumbent has all but dropped the pretence that he has given a thought to how he might govern if re-elected, while his challenger, a down-the-middle centrist who circumstances have conspired to make a figurehead for one of the most radical Democratic policy programmes in more than half a century, has barely had a chance to put out his stall. Yet none of that seems to matter all that much. Because this is a straight choice between two ideas of America. One is open, outward-looking, compassionate and hopeful; the other closed, insular, racist and dark.

If there is a known quantity, it is, paradoxically, the challenger. Biden would seek to restore a pre-2016 equilibrium to the White House. At home he would apply a salve after the cruelty and chaos of the last four years. In the wider world, he would mend relationships, rebuild alliances and seek to steer America back to the position of global leadership it forfeited under Trump. The incumbent is an open book – his instincts and his uncomplicated ideas have been fixed for decades – but he is far more erratic, more unpredictable and more dangerous. Facing into a second term with the Republican Party bending to his will, the government reshaped in his image and the authoritarian drift accelerating on his watch, Trump could yet test American democracy in ways that were once unthinkable.

For the majority of voting Americans – who, remember, voted for Hillary Clinton in 2016 and are likely to favour Biden this year – the end of the Trump presidency would be a moment of immense relief. Of course, a Biden victory would not sweep away the country’s many problems. Nor would it erase the underlying reasons for the rise of Trumpism. To think that Biden can unite such a polarised country is wishful thinking. In foreign policy, he would be more strategic and less abrasive than Trump, but the shift in US thinking towards a world it regards as an increasingly competitive geopolitical space predates Trump and would outlast him. And yet, in an election that has so much riding on it, Americans will seldom face a more straightforward choice.