The Irish Times view on the Vienna terror attack: a brutal act of violence

The atrocity came before a new coronavirus lockdown was due to come into force in the city, with crowds filling the cafes and bars on what many saw as a last evening of freedom 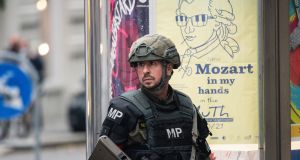 A member of Austrian Military Police patrols after multiple shootings in the first district of Vienna on Monday night. Photograph: Christian Bruna/ EPA

He had tried unsuccessfully to travel to join the war in Syria. So Kujtim Fejzulai brought his personal war to the streets of Vienna. The 20-year-old, a North Macedonian and Austrian citizen and passport-holder, who terrorised the centre of Vienna on Monday night, had been released early under juvenile law from a 22-month prison sentence in December after having been arrested on his way to join Islamic State in Syria.

The attacks occurred at six locations close to Seitenstettengasse in the heart of the Austrian capital. One of those was the central Stadttempel synagogue, although closed at the time.

Fejzulai was shot dead by police 10 minutes after the start of his rampage which took the lives of four others, leaving 17 in hospital. It was a brutal act of violence that again, only a few days after France suffered similar terrorist attacks – the beheading of a teacher and a knife attack at a church – highlights the vulnerability of all European capitals to violence from within our own communities from supporters of Islamic State. Whether he was actually a member or had accomplices remains unclear – 15 homes have been searched, and several people arrested – but ultimately makes little difference to the sort of threats we are all facing. The terrorist group, which has been substantially defeated on the battlefields of the Middle East, has used its dwindling base internationally to take the jihad to the West.

The Vienna attack came before a new coronavirus lockdown was due to come into force in the city, with crowds filling the cafes and bars on a balmy night, enjoying what many saw as a last evening of freedom. A last window of opportunity for weeks for the gunman. Such violence is ultimately impossible to prevent without turning our cities into armed camps. Like the coronavirus pandemic it forces us to make hard choices between degrees of freedom and total security, between minimising danger and eliminating it. Like the pandemic, if we choose to remain open societies and sustain social mixing we will pay a price. It is one we must pay.