US pushes Mexico for more in talks over tariffs and border 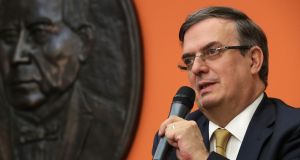 Mexican and US officials resumed talks on trade and migration on Thursday, with the Trump administration resisting calls from US businesses and some Republican lawmakers to ease up on a plan to impose import tariffs on its southern neighbour.

Vice president Mike Pence, who led an initial round of negotiations in Washington on Wednesday, said the talks were positive but the White House still wanted Mexico to commit to working harder to combat illegal immigration.

“We welcomed the efforts of the Mexican officials to offer solutions to the crisis at our southern border, but we need Mexico to do more,” he said.

Mr Pence was echoing US president Donald Trump, who said on Wednesday that “not nearly enough” progress had been made in a first round of talks, and warned that the tariffs would go into effect on Monday if Mexico did not step up efforts to stem the flow of mostly Central American migrants heading for the US border.

US stocks and Treasury yields spiked higher on Thursday after Bloomberg News reported that the United States is considering a delay in the tariffs as talks continued, citing people familiar with the matter.

Last week, Mr Trump said Mexico must take a harder line on migrants or face 5 per cent tariffs on all its exports to the United States from June 10th, rising to as much as 25 per cent later this year.

The unexpected announcement rattled global financial markets and even Mr Trump’s fellow Republicans fretted about the potential economic impact on US businesses and consumers who would have to absorb the costs.

If the tariffs go ahead, the United States will be in a serious trade dispute with both China and Mexico – two of its three top trading partners. That is a situation that US business groups are keen to avoid.

Mr Trump said on Thursday he would decide whether to carry out his threat to hit Beijing with tariffs on at least $300 billion (€266 billion) in Chinese goods after a meeting of leaders of the world’s largest economies late this month.

Officials of the US Federal Reserve and International Monetary Fund separately warned that global trade tensions and rising tariffs posed an increasing risk to decades of US expansion, as well as to the global economy.

Mexican foreign minister Marcelo Ebrard had meetings at the State Department on Thursday and staff-level meetings were scheduled for the afternoon with Mexican officials at the White House, a White House official said. “We are going to continue talks this afternoon. We’re not done yet. I think we are advancing,” Mr Ebrard told reporters.

With Mr Trump on a trip to Europe until Friday night, a quick agreement in the US-Mexico talks is not anticipated by the US side, however.

The immigration issue came into sharper focus on Wednesday with news that US border officers said they apprehended more than 132,000 people crossing from Mexico in May, the highest monthly total in more than a decade and reaching what officials said were “crisis” levels.

“The US authorities have behaved very well, [including] President Trump, because they haven’t closed themselves off to dialogue and we hope that a deal is reached today,” he told a news conference.

Nevertheless, Mexican officials have prepared a list of US products that may face retaliatory tariffs if talks do not end in agreement.

The tariffs would target US products from agricultural and industrial states regarded as Trump’s electoral base, a tactic China has also used with an eye toward the president’s 2020 re-election bid.

US pig farmers fear Mexico will hit back on products such as pork. Mexico bought about $1.5 billion worth of American hams and other pork products in 2017, making it the sector’s top export market by volume.

“People are really scared,” said Nick Giordano, vice president and counsel for global government affairs at the National Pork Producers Council. “This is generating a tremendous amount of uncertainty and potentially if this goes forward, it’s going to be financial turmoil.”

Mexico will reinforce its southern border after an “incursion” of hundreds of Central American migrants into Mexican territory on Wednesday, interior minister Olga Sánchez said on Thursday.

It was unclear whether such steps would appease Mr Trump, who is struggling to make good on his key 2016 presidential campaign promise to build a wall along the border as part of a hardline immigration stance.

Brad Parscale, Trump’s 2020 campaign manager, tweeted on Thursday: “Mexico sent representatives to Washington as soon as President @realDonaldTrump announced possible tariffs. We are expected to have over 1 MILLION people arrive at our Southern Border this year. Dems are playing games with the border. The president is not!” – Reuters