Time is up for May but Westminster has already moved on 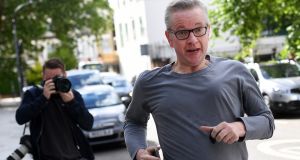 When Theresa May resigns as Conservative Party leader on Friday, it will be without ceremony and effected almost invisibly in an exchange of letters with the backbench 1922 Committee.

Westminster’s attention has in any case already moved to the contest to replace her, which starts next Monday and sees the first round of voting by MPs three days later.

The big, unruly field of candidates includes some preposterous figures and has thrown up its share of outlandish proposals for dealing with Brexit. But the three candidates with the largest number of public endorsements from MPs – Boris Johnson, Jeremy Hunt and Michael Gove – are in broad agreement on what it will take to get a Brexit deal through parliament.

Of the three leading contenders, Gove is closest to recognising the limits of what Britain can achieve

All three have narrowed their demand to a change to the Northern Ireland backstop that would offer Britain an exit mechanism, a time limit or a guarantee that it will be replaced by alternative arrangements to keep the Border open. They have been encouraged by British media reports from Brussels that the EU is willing to consider a time limit, perhaps of five or seven years.

Some senior EU figures have mused in private about the option of a lengthy time limit but the firm consensus among the 27 remaining member states and in the institutions is that the withdrawal agreement, including the backstop, cannot be changed.

Some leadership candidates have called for bilateral negotiations with Dublin about accelerating the introduction of alternative arrangements but the Irish Government will not enter any such talks before the withdrawal agreement is ratified.

Of the three leading contenders, Gove is closest to recognising the limits of what Britain can achieve and accepting that the backstop cannot be removed from the withdrawal agreement but could be “supplanted” later by alternative arrangements.

He suggested this week that Sinn Féin’s poor performance in last month’s local and European elections could encourage the party to work to restore the Stormont institutions.

“That will make it easier for us to get those alternative arrangements in place and to provide security to border communities and also to ensure that we can have the both the safeguarding of the Belfast Agreement but also the economic benefits that have flowed since then,” he told the Spectator’s Fraser Nelson in a public interview on Wednesday night.

The obstacles in the way of alternative arrangements based on technological and administrative measures replacing the backstop are formidable. This is partly because of the backstop’s dual purpose: to protect the peace process and to defend the integrity of the European single market – and Ireland’s place in it.

Peace on the island is clearly a fundamental national interest of the Irish State but so too is Ireland’s full and unencumbered membership of the single market. This is all the more important in view of Ireland’s strategic shift towards Europe after Brexit, which is further encouraged by Donald Trump’s trade policy.

Ireland’s future economic relationship with the rest of the world depends more than ever on its place in the EU and any doubt cast over its position in the single market could be exploited by competitors, including other EU member states. This will make it difficult for any Irish government to agree to a replacement for the backstop that does not maintain full regulatory alignment across the island.

Johnson continues to claim that he will take Britain out of the EU on October 31st with or without a deal and that he will not seek a further extension. If MPs see Britain heading towards a no-deal Brexit, however, they can tell him to seek an extension – just as they instructed the current prime minister in March.

The next prime minister’s interlocutors in Brussels will be more relaxed than London would wish about a no-deal Brexit, not least because they believe it would be short-lived. Any prime minister who leads Britain into a no-deal Brexit at the end of October is likely to face an election before long, which most Conservatives believe they would lose.

That would leave the next government returning to Brussels to negotiate a deal, possibly in the midst of economic turmoil and certainly from a much weaker position, outside the EU and with none of the protections currently offered to Britain by article 50.