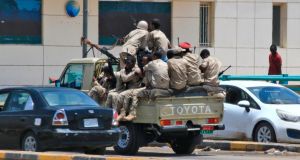 Sudan has been suspended from the African Union (AU) amid growing fears that splits among the ruling military regime could lead to civil war and anarchy.

The decision by the 55-member state union will significantly increase pressure on the country’s new military rulers, raising the prospect of diplomatic isolation on the continent and sanctions if they do not hand over power to civilian-led authority to allow an “exit from the current crisis”.

In a strongly worded statement the AU said it deplored the loss of innocent lives in recent days in Sudan and called for the military and security forces to ensure the full protection of civilians and respect for human rights and freedoms.

The AU’s decision was prompted by the deaths on Monday of more than 120 people when paramilitaries attacked a protest camp in the centre of Khartoum. Many hundreds were injured.

There is increasing anxiety among observers that the crisis will exacerbate divisions within Sudan’s security establishment, raising the prospect of armed factions battling for power.

“The divisions ... are real and very deep and ... raise the prospect of army units turning their guns on each other. That was already the nightmare scenario and now it looks more real than ever,” said Rashid Abdi, a Nairobi-based analyst of east African politics.

The AU had set repeated deadlines in a bid to force concessions from the transitional military council (TMC), which seized power when the dictator Omar al-Bashir was ousted in April after months of mass protests.

Negotiations between the military and protest leaders broke down over disagreements on whether a planned transitional body would be headed by a civilian or a military figure.

“The TMC was never monolithic with a single vision. It was deeply divided from the beginning. There were some who were very close to Bashir, others who were moderate, and some who were ambivalent ... but the large scale casualties has triggered a crisis within the TMC,” said Mr Abdi.

The deaths on Monday have been blamed on the paramilitary Rapid Support Forces (RSF), which is largely made up of militia accused of systematic human rights abuses during the war in Darfur.

The force is led by Mohamed Hamdan Dagalo, known as Hemedti, who also serves as the deputy head of the TMC.

Trained officers drawn from Sudan’s elite look down on Mr Dagalo, a semi-literate camel trader turned warlord from the far south who was promoted by Mr Bashir, and see him as swaggering and arrogant.

Tensions also exist between senior officers who benefited from Mr Bashir’s regime and want to retain much of the repressive system he put in place and the opportunities for enrichment it provides them, and younger officers who are more sympathetic to the pro-democracy movement.

There are unconfirmed reports claim that hundreds of lower ranking officers of the regular army have been ordered to posts outside Khartoum, and that dozens whose loyalty has been deemed suspect have been disarmed and detained.

Jean-Baptiste Gallopin, a political analyst and expert on the role of armed forces in revolutions, said the crackdown could be a trigger for an attempt by dissatisfied elements within the military to move against the current leaders.

“A coup can only succeed quickly ... A failed coup could led to a civil war. It is a very dangerous situation. The TMC has pushed itself into a corner by using this violence, the opposition is defiant and will not accept negotiation and at this stage it looks as if the only option for the TMC is a strategy of large scale repression,” Mr Gallopin said.

Monday’s crackdown prompted outrage in western capitals but China and Russia blocked a United Nations resolution condemning the attacks. Russia said on Thursday it opposed foreign intervention in Sudan and that the authorities in Khartoum should subdue what it described as extremists.

The TMC has also received diplomatic support from Saudi Arabia and the United Arab Emirates. Both countries have also offered significant financial assistance.

Khartoum and other cities in Sudan remained tense on Thursday, with further reports of scattered gunfire. Pro-democracy groups in Sudan called for supporters to avoid all violent confrontation with security forces.

“Build barricades and leave. If they are removed we can return and build new ones later ... Our revolution is committed to peace,” the Sudanese Professionals Association said on social media.

Officials in the Sudanese capital have, for the first time, given the death toll in the violence this week, claiming that 61 people were killed. – Guardian