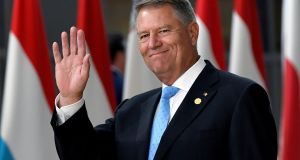 Romania’s president, Klaus Iohannis, has urged its political parties to sign a “national agreement” to scrap sweeping justice reforms by a government now reeling from defeat at the ballot box, EU criticism and the jailing of its de facto leader.

The ruling Social Democrats (PSD) lost European elections on May 26th, taking less than half the combined opposition vote, and on the same day saw Romanians use a non-binding referendum to reject its planned judicial overhaul.

The following day, PSD chief Liviu Dragnea was jailed for 3½ years for inciting abuse of office, ending his domination of the party and government and his bid to weaken the very anti-corruption legislation that snared him and many allies.

Since the treble blow, Romanian prime minister Viorica Dancila has replaced aides who were close to Dragnea, and said the government was ready to drop justice reforms that the EU warns could trigger infringement proceedings.

“Romanians have clearly and firmly voted against the anti-European approach promoted in the campaign by the PSD and [coalition partner] ALDE, two parties that were heavily punished by the electorate,” Mr Iohannis said after meeting leaders of ruling and opposition parties in Bucharest.

“Romanians have clearly shown that Romania is a pro-European country . . . We didn’t enter the EU by accident or by mistake. We want to have the rule of law, an independent judiciary, good laws for the justice system.”

Mr Iohannis’s pact would see parties agree to enshrine in law the referendum results, which saw 85 per cent of voters reject any pardon or amnesty for graft offences and oppose the use of emergency decrees to change the justice system.

The proposed agreement would also include a commitment from all parties to reverse judicial reforms that have raised alarm in Brussels and to only introduce new changes in line with the recommendations of the EU and its advisory bodies.

“The broad majority of parties agreed that the results of this referendum must be implemented in accordance with how the people voted, and that Romania’s European path must be consolidated,” Mr Iohannis said on Wednesday evening.

“I await a positive response in the coming days to my initiative to sign this national agreement,” he added.

Ms Dancila has been a loyal ally of Dragnea, and took office after he forced out two PSD prime ministers who challenged his authority, but she has made clear her desire to change course since he was jailed and voters punished their party.

After she met European Commission president Jean-Claude Juncker and his deputy, Frans Timmermans, this week, the government said they “welcomed [her] commitment not to advance controversial judicial reforms”.

They also “reconfirmed the European Commission’s commitment to work in close co-operation with the Romanian authorities to find solutions to rule-of-law issues,” the government added.

Ms Dancila told the Politico news website this week that “from now on, the justice subject does not exist on the government’s agenda, but we will focus on areas of interest that are a priority for people, such as health, education and infrastructure”.