China accuses US of hypocrisy over response to racial protests 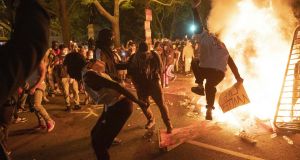 Protesters demonstrate near the White House in Washington, DC, on Sunday in relation to the death of George Floyd. Photograph: Roberto Schmidt/AFP via Getty Images

Chinese officials and state media taunted the US government over race-related protests that have raged in several American cities in recent days, comparing the unrest with the recent Hong Kong protests and accusing Washington of double standards and hypocrisy.

“Protests and chaos have spread from the US state of Minnesota to the rest of the country, and Chinese netizens are cheering,” Hu Xijin, editor of the nationalist tabloid the Global Times, wrote in the newspaper.

With the hashtag “US riots” surpassing more than 1.5 billion views in China by Monday, another story in the same paper headlined “US double standards on domestic riots and Hong Kong turmoil mocked on Chinese internet” criticised the “deep-rooted political dysfunction and chaotic values in the US”.

State broadcaster CCTV said in a commentary that “[US politicians] ignite flames everywhere and wish the world to be in chaos. But when the minority groups in their own country are fighting for legitimate rights they cannot wait to crackdown harshly. Such hypocritical double standards are truly disgusting.”

Protests in the US were sparked by the death of George Floyd, an African-American man killed while in the custody of a white police officer in Minneapolis. They come after a year of often violent pro-democracy demonstrations in Hong Kong, where police officers have also repeatedly been accused of using excessive force.

Washington has been vocal in its support for Hong Kong’s pro-democracy movement, particularly since Beijing declared last week it would impose a national security law on the semi-autonomous city.

Chinese media has widely circulated clips of the US protests and the police response over the past few days, accompanied by commentary suggesting the Hong Kong police had been highly restrained and professional in comparison.

In one online comment, foreign ministry spokeswoman Hua Chunying responded to a post from the US state department criticising the crackdown in Hong Kong with the words “I can’t breathe”, some of the last words uttered by Floyd before he died.

In another tweet, Mr Hu took aim at US president Donald Trump.

“Mr President, don’t go hide behind your secret service,” he wrote. “Go talk to the demonstrators seriously. Negotiate with them, just like you urged Beijing to talk to Hong Kong rioters.”

The broadsides launched over the protests come at a time when US-China tensions were already high over a number of issues, including trade, China’s initial handing of the coronavirus outbreak and its human rights record.

The critical tone from Beijing is in line with its recently adopted “wolf warrior” diplomatic approach, a typically assertive official response to disputes and international issues.

Referring recently to the possibility of a new cold war and a reshaped world order, some Chinese commentators such as Mr Xu have argued Beijing’s one-party system is better equipped to handle contemporary challenges than established western democracies.

Speaking of the protests, he said that law and order was expected to be restored in Hong Kong but America’s future was bleak.

“There are no solutions to conundrums in the US. The US will become more chaotic as its economy continues to worsen, and as its political system declines,” he said.