Greece suffers from anxiety as it prepares to welcome tourists

Greece Letter: Opening to China raises questions as to political pressures on tourism 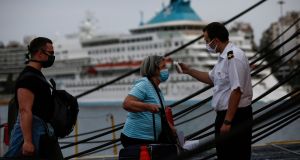 Temperatures are checked as people board a ship at the port of Piraeus, near Athens. The Greek islands are reopening after coronavirus. Photograph: Yannis Kolesidis

“Tourism is the crown jewel of the economy,” declared Maria Daskalantonaki, chief executive of the Grecotel group which operates 36 hotels in Greece, 20 of which she expects to open for what is left of the season.

Daskalantonaki stated specifically that with a 50 per cent occupancy rate, a hotel is viable, but not below that level. Scale that down from a hotel operation to a taverna or a cafe and the same rule of business applies: one of the village tavernas served nine meals in the five days after reopening. The other taverna hasn’t bothered to open. This time last year, both would have been at least two-thirds full. Not only are there no tourists, but locals have yet to rediscover the “normal”.

Of the 29 countries from which Greece will accept visitors untested for coronavirus from June 15th, only Germany is of any real significance to the Greek economy, since the other four countries from which Greece derives most of its tourism income – the UK, the US, France and Italy – are excluded. Considerable traffic, mostly by road, is expected from Greece’s immediate neighbours – Albania, North Macedonia and Bulgaria.

It is possible that tourists from other countries will be admitted but will be tested and, if necessary, quarantined. A “quarantine hotel” has been designated in each major centre, along with upgraded hospital facilities, in case of any outbreak of infections. But this does little to allay the fears of residents in areas which, so far, have been only slightly affected by the virus.

The Aegean islands and the Dodecanese (including Rhodes), Crete and the Ionian islands (including Corfu) have been relatively unscathed, while the Athens area, the land border with Turkey, northern and western Greece have been the worst affected. Considering that many people deride the concept of social distancing, it’s interesting that the semi-autonomous monastic region of Mount Athos, where monks have defied the distancing regulation, has recorded the highest rate of infection.

Predictably, some eyebrows were raised at the inclusion of China in the permitted category, and this highlights a general anxiety about tourism in general: can we be sure that health was the priority in making the decision? Tourism from China has been increasing exponentially and Chinese investment in Greece is so intense that one is entitled to suspect that more than health issues were at stake.

There are certainly political pressures involved in reaching an all-EU compromise. On May 9th, Greece’s minister of tourism stated unequivocally that passengers could only embark at their home airport if they carried a “health passport”. Two days later, that stipulation was withdrawn, apparently during negotiations with the EU.

It raises considerable doubts and anxieties about the safety of immigration, even from the 29 countries deemed to be relatively “safe” from Covid-19. While it is intended to randomly sample all incoming visitors, that cannot ensure complete safety from infection.

The period opening now, for people in those “safe” areas, is far more scary than what we have already experienced. At present I feel safe using public transport. But not once the tourists arrive.

As Daskalantonaki pointed out, “Recreational tourism has been recognised as a right, and has become a consumer product for northern Europeans.” But the notion that people expect to be able to holiday in sunnier places than home is now being challenged not only by climate change (the June holiday in Ireland was actually warmer than we had it here in Corfu) but also by the economics of air travel and the health hazards highlighted by Covid-19.

Our entire attitude to “recreation” needs to be reconsidered. For years we have been assured that Greece’s tourism industry is developing niche markets other than the formula of sun, sand and cheap beer. But those markets have yet to show real growth. The vast majority of tourists are sunseekers and have little interest in the glories of ancient Greece. There are no beaches near the Parthenon.

Part of the northern impetus towards the south is undoubtedly due to a fascination to see how people live in places where the sun shines most of the year, where living outdoors is the norm, and there is a different quality of life. But there is a systemic obstacle to any basic understanding of why there is such a difference between northern and southern ways of life.

In any case, much of that is changing. Young people are more likely to say “Bye bye” than the Greek “Yia sas”, and even among older people “Thank you” is replacing the Greek word “Evcharisto”. These are not merely signs of increasing westernisation, but typical of a changing quality of life, in which consumers are moving towards ready-made foods, garden centres and the internet, rather than organic and original thinking.

On all fronts, the crown jewels of Greece’s traditional attractions may be less than sparkling.

1 Cluster of Covid-19 infections at Kerry ‘house party’ investigated
2 Coronavirus: Two more deaths confirmed amid concern over new clusters
3 Brightest comet of the century visible in Irish skies for the next week
4 Johnny Depp: Ex-wife or friend defecated in bed in ‘fitting end’ to marriage, court hears
5 Reopening of pubs that do not serve food may be delayed beyond July 20th
Real news has value SUBSCRIBE