EU’s undiplomatic diplomat seeks third way between US and China 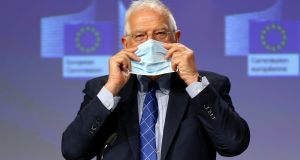 Josep Borrell: ‘I cannot imagine something more easy to produce than a mask, a piece of textile. And suddenly it became a critical thing.’ Photograph: Pool/Getty

How can the European Union defend the interests of its member states internationally amid a shifting global order? The man whose job is to make the 27 speak with one voice is Josep Borrell, a veteran Spanish politician who believes Europe must forge its own path amid an era-shaping rivalry between Washington and Beijing.

Borrell chairs the regular meetings of the bloc’s foreign ministers, in which they gather to try to forge consensus and deliver a joint response to the global challenges of the day. Last week it was China’s passing of a security law that undermined the autonomy of Hong Kong. Before that it was Israel’s threat to annex parts of the occupied Palestinian West Bank.

The EU still favours Washington over Beijing, Borrell says, but not all the way

In the background of each dilemma is an increasingly assertive Beijing and the retreat by the administration of US president Donald Trump from multilateralism, leaving the EU isolated as it defends systems of international co-operation jointly forged in the wake of the conflicts of the 20th century. The EU still favours Washington, Borrell says, but not all the way.

“We have to be like Frank Sinatra, no? My way,” he says. “We are not going to embark on the American side against China because we don’t share the same interests in our relationship with China.”

Borrell grew up in a small mountain village where his parents ran a bakery. They were “heavily marked by war”, he once told an interviewer: his father was imprisoned under the dictator Francisco Franco, and they opposed to his entry into politics. He became a city councillor in his 30s after Spain’s transition to democracy, rose to the leadership of the opposition Socialists and later became foreign minister.

In domestic politics he is known as a prominent Catalan who opposes independence. He has said he identifies as both Catalan and Spanish but is a nationalist of neither, and has tried to be a moderating voice in the bitter dispute. When addressing a rally against Catalan independence in Barcelona in 2017, shouts began in the crowd demanding the imprisonment of the Catalan leader Carles Puigdemont. “No. No. No,” he told the crowd sternly. “Don’t yell like mobs in the Roman circus. Only judges can say who goes to prison.”

This kind of stubborn unwillingness to please made him a surprise nomination to the role of Europe’s top diplomat last year at age 72. Surely it was only a matter of time before the blunt old Borrell caused an incident?

The role has not reformed him. Unusually for an EU official, he speaks plain English in short sentences with a clear meaning, unclouded by the technocratic jargon that pervades Brussels. But despite the ambitions of the von der Leyen commission for a more “geopolitical” commission that defends European interests on the world stage, Borrell has struggled to get the member states to speak clearly with one voice.

“What worries me is that in Libya, we are following the same path like in Syria”

Reluctance to disrupt economic interests and differing viewpoints among the 27 make joint statements, let alone action, elusive. It’s a stark contrast to the willingness of other powers to use economic coercion and even military force.

Does it make the EU look weak? “We are not an authoritarian state. We are not even a state,” Borrell says. “We have to get agreement among the member states, and they have very different positions.”

One example is the conundrum of Libya, where involvement by Turkey and Russia is giving a worsening conflict the ominous character of a proxy war.

“What worries me is that in Libya, we are following the same path like in Syria,” Borrell says. The EU has launched a naval mission, Irini, to try to enforce a widely flouted arms embargo, but such trade remains open through other routes. “We cannot deploy troops in the land borders of Libya, can we? We do what we can.”

Borrell is trying to strike diplomatic deals with source states to try to counter the one effect of instability that truly rattles EU capitals: the potential of a surge in arrivals of migrants.

The pandemic has brought certain strategic weaknesses into focus. “We realised we were in a critical position because supplies of medical stuff were in shortage. Just imagine a simple mask, very easy to produce. I cannot imagine something more easy to produce than a mask, a piece of textile. And suddenly it became a critical thing. A critical issue,” Borrell said.

“Let’s imagine what could happen if this critical situation could be related to infrastructure, communications, things that are much more difficult to produce.”

We have to have strategic autonomy. In practical terms it means being able to respond to crises by our own means

It’s a reference to increased wariness among member states towards Chinese involvement in building critical telecoms infrastructure, and buy-ups of emerging technology companies. It reflects the new enthusiasm in the commission for self-sufficiency and – somewhat alarming for the Irish Government – limits to globalisation.

“We Europeans cannot believe that all our needs will be solved by the market,” Borrell said. “We have to have strategic autonomy. In practical terms it means being able to respond to crises by our own means. And we don’t have these means. And the crisis has proved it.”