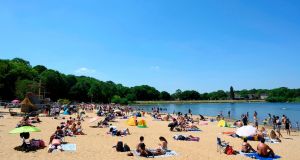 Sun bathers enjoy the warm weather at Ruislip Lido in London on Saturday. Boris Johnson has set out a gradual easing of lockdown measures in England, with socially distanced groups of six friends and families allowed to meet in parks and gardens from Monday. Photograph: AFP

Britain is facing a “very dangerous moment” with the easing of lockdown restrictions, the deputy chief medical officer said last night after a growing number of experts questioned the relaxation of rules.

Professor Jonathan Van-Tam called for people to show restraint as shutdown measures are eased in England from Monday.

He told the daily Downing Street press conference that the British government and the public had a “dual responsibility” to prevent a second wave of the virus, adding: “I believe this is also a very dangerous moment. We have to get this right.”

Prime minister Boris Johnson announced this week that from Monday in England, friends and family can meet in parks and gardens in socially distanced groups of six.

But as people flocked to beaches and beauty spots in the sweltering heat over the weekend, Professor Peter Horby, of the University of Oxford, joined scientists Sir Jeremy Farrar and Professor John Edmunds, all members of the Scientific Advisory Group for Emergencies (Sage), to warn that ministers are taking risks.

Prof Van-Tam said scientific opinions “always vary to some extent”, and told the press conference that the lockdown easing must go “painstakingly” slowly.

He added: “This is a dual responsibility here of government to go slowly and carefully and to take the advice from the scientists.

“Of the scientists, to watch this whole thing very closely over the next few weeks.

“And, of the public in general to actually follow the guidance.

“Don’t tear the pants out of it, and don’t go further than the guidance actually says.”

Declaring that “football is coming back”, Mr Dowden said: “Football, tennis, horseracing, Formula 1, cricket, golf, rugby, snooker and others are all set to return to our screens shortly.

“I’m glad to confirm today that a third of matches to finish the season will now be free to view including the Liverpool v Everton derby and live Premier League football will be on the BBC for the first time in its history.”

Asked for his response to experts who have expressed concern the lockdown is being eased too quickly in England, Mr Dowden said it must be remembered there are more than 50 scientists in Sage “all of whom will have their different perspectives”.

He told the daily briefing that scientists are “absolutely right to urge caution”.

But professor Robert West, a participant in the Scientific Pandemic Influenza Group on Behaviours (SPI-B) which advises Sage, emphasised on Saturday that some 8,000 infections and 400 deaths a day are still occurring.

The Observer reported that a letter sent by 26 senior UK academics and health administrators to Downing Street complained about the impact of the Dominic Cummings controversy.

The prime minister’s key adviser Mr Cummings sparked uproar after it emerged he had driven from London to Durham with his wife and child during the lockdown.

The group also warned about a failure to enact an effective test, trace and isolate system to pinpoint and then quarantine newly infected people.

As a result, they are now “very concerned for the safety and wellbeing of the general public” as the lockdown measures are relaxed, the newspaper reported.

A poll for the newspaper by Opinium found that 81 per cent of voters think Mr Cummings broke the lockdown rules.

The easing of England’s lockdown will also signal the reopening of schools to allow more students to return, while outdoor retailers and car showrooms are also able to reopen.

Asked if he agrees it is too soon to ease more of the lockdown, prof Horby told BBC Radio 4’s Today programme: “Actually, I do. We have still got 8,000 cases a day.”

He added that although measures taken so far “have been very successful in... decreasing the numbers”, it is vital “we don’t lose control again”.

He said one of the key issues is the NHS Test and Trace system, which has been rolled out across England with the help of 25,000 contact tracers.

But the programme will not be operational at a local level until the end of next month, while an accompanying app is delayed by several weeks.

Prof Horby added: “We are entering a period where there is a risk of increasing transmission, but we don’t yet have that safety net fully in place.”

Another Sage member, Professor Calum Semple, insisted that a “brave” political decision had been taken on schools reopening “were everything normal”, but cautioned that high levels of transmission were still being seen, according to the BBC.

Sir Jeremy also said the track and trace system needs to be “fully working” before measures are eased, warning the virus is still spreading “too fast to lift lockdown in England”.

In Scotland, people can now meet others from one other household at a time as long as it is outdoors, but social distancing should continue and groups must be a maximum of eight people.

People in Wales will be allowed to meet up with others outdoors from Monday.

In Northern Ireland, more retailers can open and small outdoor weddings will receive the go-ahead from June 8th if the coronavirus infection rate remains under control. - PA