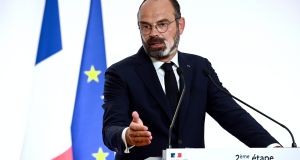 When France enters the second phase of its reopening next Tuesday, “liberty will at last become the rule, and prohibition the exception,” prime minister Édouard Philippe told a press conference on the easing of coronavirus restrictions on Thursday.

Unlike Ireland, which has established a five-phase reopening plan through to August 10th, France is improvising measures to combat the virus in stages, assessing progress and adapting every three weeks. The next, third phase of reopening will begin on June 22nd.

The less people move around, the less the virus will be propagated

The most welcome measure announced on Thursday was the lifting of the ban on travel more than 100km from one’s residence. From Tuesday, the French will be allowed to travel anywhere in mainland France without restriction.

Philippe nonetheless called on citizens to demonstrate a sense of responsibility, saying, “The less people move around, the less the virus will be propagated. It’s better to postpone long-distance travel if you can.”

The Paris Île-de-France region, which has a population of 12 million, and the small overseas departments of Mayotte and Guyane, have graduated from red to orange zones, meaning controls will be relaxed somewhat but they will still be subject to more restrictions than the rest of France, which is considered a green zone.

The reopening of cafes, bars and restaurants has been “the object of much anticipation”, Philippe said. “We should be pleased, because they are part of our art de vivre.”

Cafes, bars and restaurants will be permitted to open throughout France from Tuesday. But in Paris, Mayotte and Guyane, they will be allowed to serve only tables on outdoor terraces. Philippe said it would be up to mayors to decide if owners could encroach on public space to place more tables outside.

Barrier gestures must be rigorously respected. People are strongly urged to wear masks

Bars in green zones will not be allowed to serve standing customers indoors, because of the difficulty of enforcing social distancing. No more than 10 people can be seated at any restaurant table, and tables must be placed at least one metre apart. All waiters must wear masks, and the same waiter must serve a table from start to finish of a meal.

No more than 10 people may gather in any public space anywhere in France. “Barrier gestures must be rigorously respected. People are strongly urged to wear masks,” Philippe said.

The reopening of public parks and gardens from Saturday, to enable people to enjoy the three-day Pentecost holiday weekend, was a positive surprise. Theatres, concert halls and museums can reopen on Tuesday, on condition they enforce social distancing and require masks. Cinemas will not be allowed to reopen before June 22nd. Contact sports and nightclubs remain banned until further notice.

France wants the EU to take a collective decision on June 15th regarding the reopening of the union’s external borders. “Within Europe, France supports opening borders without quarantine. We will apply measures of reciprocity with countries that impose quarantine on the French,” Philippe said.

Oral French examinations for the baccalaureat diploma will not be held this year. Teachers will instead mark students on the basis of performance during the first two trimesters of the school year.

The number of jobless in France increased by a record 800,000 in April, to more than 4.5 million. Asked if he had accelerated the reopening in the hope of salvaging the economy, Philippe said the pandemic had always been “a balancing act between health security and the necessity of reopening. Today, health security has become less difficult, but economic recovery will be steep.”