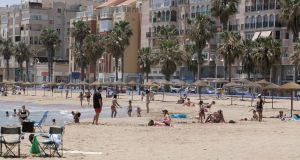 People enjoy a warm day at the beach in Melilla, Spain, on the day the autonomous region starts phase two of the government’s plan to gradually ease the lockdown measures. Photograph: F G Guerrero/EPA

Spain has reported no deaths in a 24-hour period from Covid-19 for the first time since March.

He told a news conference there were only 71 new infections over the past 24 hours.

“We are in a very good place in the evolution of the pandemic,” Mr Simon said.

“The statistics are following a trend. They are going the right direction.”

Spain reported its first two deaths on March 3rd and on April 2nd, it recorded 950 deaths in 24 hours, the peak death toll.

On Monday, Spain reopened nearly all its beaches as part of government steps to revive a devastated tourist industry.

Bilbao’s Guggenheim Museum reopened its doors, the first such institution to do so since the strict lockdown imposed on the country in mid-March began to be eased.

Pupils began to return to schools in England on Monday as it eased coronavirus restrictions amid warnings from public health officials that the lockdown was being lifted too quickly.

The new rules allow for families and friends to meet up for picnics and barbecues and travel freely around the country, so long as they do not stay anywhere overnight that is not their primary home. Primary school children in certain years will return to class as the government and education unions continue to fight over whether it is safe to do so.

Northern Ireland, Wales and Scotland are following a different timeline to England while public health officials said the new rules were “not supported by the science”.

The Association of Directors of Public Health disagreed with some changes including allowing groups of up to six people to meet outdoors and in private gardens and said that pictures of crowded beaches and beauty spots over the weekend showed “the public is not keeping to social distancing as it was”.

On Monday, the Islamic Republic, one of the worst-hit countries in the region, reported 2,979 more cases of Covid-19, its highest daily count in almost two months.

Iran started easing its lockdown in April after a drop in deaths but May saw an uptick in the rate of reported infections, an acceleration the government put down to increased testing.

“The outbreak is not over yet and at any moment it may come back stronger than before,” Mr Namaki said in a news conference broadcast on state TV.

“If our people fail to respect the health protocols ... we must prepare ourselves for the worst situation.”

Government employees went back to work and mosques resumed daily prayers on Saturday as part of the relaxation of the lockdown.

But authorities had to reimpose restrictions in the southern provinces of Khuzestan and Sistan Baluchestan in mid-May after an uptick of cases there.

“There is still a long way ahead of us in our fight against this virus ... All the health protocols should be respected,” Mr Namaki said.

South Korea’s top infectious disease expert has pleaded for people over 65, pregnant women and other medically vulnerable individuals to stay at home as officials struggle to trace and stem the spread of coronavirus amid increased public activity.

Jeong Eun-Kyeong, director of the Korea Centres for Disease Control and Prevention, made the comments while addressing 24 new cases linked to a group of churches near the capital Seoul.

She also raised concern over the hundreds of transmissions linked to workplaces, including call centres and at least one massive warehouse.

“We have been seeing an increased number of high-risk patients, who have been infected through family members or religious gatherings,” Ms Jeong said. “There’s a particular need for people over 65 years in age, pregnant women and those with chronic medical conditions to be alert,” she added, recommending that they avoid face-to-face gatherings with others.

South Korea has so far reported more than 11,000 cases and around 270 deaths.

Christian churches have been campaigning for worshippers to return since authorities eased social distancing guidelines in mid-April, but the resurgence in Covid-19 cases in the greater capital area in past weeks has pushed officials to restore some controls.

Incheon, a port city west of Seoul, on Monday banned gathering at some 4,200 churches and other religious facilities. Gyeonggi Province, which surrounds the capital, issued an administrative order to shut down warehouses, funeral homes and wedding halls.

Armenia’s prime minister Nikol Pashinian and his entire family have been infected with coronavirus.

In a Facebook statement, Mr Pashinian said he did not have any symptoms but decided to get tested ahead of visiting military units, and the test came back positive.

“I will be working from home,” the prime minister said, adding that he probably contracted the virus from a waiter who brought him a glass of water at a meeting without wearing gloves and later tested positive for the virus.

Armenia has so far reported more than 9,000 confirmed cases of the virus among its population of nearly three million, with around 130 deaths. The country’s authorities declared a state of emergency in mid-March. Last week, Mr Pashinian said the outbreak in Armenia was getting worse.

Greece has lifted lockdown measures for hotels, open-air cinemas, golf courses and public swimming pools as the country ramped up preparations for the tourism season starting in two weeks.

Primary school children also returned to classes in the country where strict public safety measures were believed to have kept the Covid-19 infection rate low, with the death toll at 175, according to heath ministry figures announced on Sunday.

International flights with relaxed screening procedures will resume to Athens and Greece’s second-largest city Thessaloniki starting on June 15th and expanding to the rest of the country on July 1st.

Screening for arriving passengers will be based on an assessment by a European Union flight safety authority, with arrivals from low-infection countries being subjected only to random testing.

Hotels with a 12-month operating licence were allowed to reopen on Monday but many chose to remain closed until closer to the start of the tourism season, citing low bookings.

India has registered 230 deaths in the last 24 hours, bringing its total to 5,394 as the country begins its three-stage reopening on Monday.

The lockdown is being eased in most places except for the containment zones now isolated due to coronavirus outbreaks.

The Health Ministry said India had 190,535 cases, which is the seventh most worldwide, exceeding Germany and France. More than 60 per cent of India’s Covid-19 fatalities have occurred in just two states – Maharashtra, the financial and entertainment hub of India, and Gujarat, the home state of Prime Minister Narendra Modi.

Experts say that although India’s cases are increasing rapidly, it is not close to the peak of the outbreak. But the government is still easing the lockdown to ease some of the economic pain and hardship.

The railways will run 200 more special passenger trains from Monday and some states have opened their borders to vehicular traffic. Maharashtra has allowed shops and offices to open outside containment zones and given a nod to the resumption of film shootings with some restrictions in place.

There are concerns that the virus may be spreading through India’s villages as millions of jobless migrant workers return home from cities during the lockdown.

Public transportation across Bangladesh has reopened, with both long-distance and city buses carrying fewer passengers after three months of suspension to prevent coronavirus from spreading.

In the capital Dhaka, magistrates from the country’s road transport authority were checking if the buses were operating under health guidelines set by the government. Domestic flight operations resumed on at least three routes and trains were resuming.

The reopening of the public transport service came amid concern that the number of infections and deaths could increase significantly in the coming weeks in the overcrowded country, which has reported 47,151 cases including 650 fatalities.

The country’s fragile healthcare system is already stressed, with reports saying Dhaka hospitals have no beds left for severely ill patients who would require intensive care and ventilation.

The government says the gradual reopening is crucial to revive the economy since growth is likely to plunge, leaving millions jobless.

China reported a spike in daily confirmed coronavirus cases to 16, all in newly arrived travellers.

Eleven were people arriving in the southwestern province of Sichuan, three in the northern region of Inner Mongolia and two in the southeastern manufacturing heartland of Guangdong. No new deaths were reported and just 76 people remain in hospital for treatment.

Another 400 were in isolation while being monitored for showing signs of Covid-19 or having tested positive for the disease without showing symptoms.

With local transmissions having fallen to virtually zero, much of the country has reopened for business and Monday saw the further restart of classes in schools that had previously only allowed those preparing for graduation exams to return to campus. Younger pupils will be allowed back next week as part of a staggered opening to prevent the further spread of the virus.

The US has sent to Brazil more than two million doses of a malaria drug touted by President Donald Trump as potentially protecting against and treating coronavirus, even though scientific evidence has not backed up those uses.

No large, rigorous scientific studies have found the drug, hydroxychloroquine, safe or effective for preventing or treating Covid-19, and some smaller studies have indicated worse outcomes from those taking the drug.

Brazil, now Latin America’s hardest-hit country, continues to see a surge in virus cases, and last week Mr Trump announced that the US was restricting travel from the country to prevent travellers from spreading the virus in the US.

In a joint statement with the Brazilian government on Sunday, the White House said the doses of hydroxychloroquine had been sent to Brazil as a prophylactic for frontline health workers and as a therapeutic for those who may come down with the virus. The White House said it was also delivering 1,000 ventilators to Brazil.

Coronavirus has infected more than six million people across the world and killed more than 370,000, according to a tally kept by Johns Hopkins University. – Agencies