Country has lowest death toll in Central America, but signs are that virus is raging 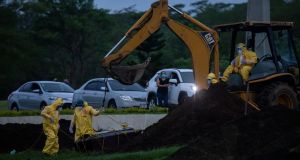 Gravediggers at Sierras de Paz cemetery in Managua, Nicaragua, on Saturday, May 30th. Nicaragua is one of the last to reject the strict measures introduced globally to curb the spread of the coronavirus and families say they are paying the price. Photograph: Inti Ocon/The New York Times

Just hours after Yamil Acevedo died in a hospital, funeral home workers in hazardous materials suits strapped his coffin to the back of a pick-up truck, drove it to a cemetery and buried him in the dark of night.

Across Nicaragua, families are being forced to hold these “express burials”, rushed funerals at all hours of the night, without time to call a priest or buy flowers. The services are happening so fast, and in such a haphazard fashion, that relatives worry terrible mistakes are being made.

“The doctor said, ‘If you can bury him as soon as possible, do it,’” said Amani Acevedo, Acevedo’s daughter. “I don’t know that the person in that coffin was even him.”

Long queues have formed at the country’s hospitals, and pharmacies have run out of basic medicines. The popular baseball season has been suspended, with players refusing to take the field. The signs are everywhere that coronavirus is raging across Nicaragua. But the Nicaraguan government insists it has the virus firmly under control, with the lowest Covid-19 death toll in Central America.

Nicaragua, a nation of 6.4 million people, is one of the last countries to resist adopting the strict measures that have been put in place around much of the world to curb the spread of the disease. It never closed its schools. It did not shutter businesses. Throughout the pandemic, the government not only allowed mass events – it organised them.

Families say the consequences of these decisions are being buried, literally, under cover of darkness. Without any testing for the virus, they are told that their loved ones died of pneumonia and – because of fear of contagion – are urged to bury them as soon as possible.

Health organisations are struggling to get accurate case numbers. Testing is limited and controlled by the government. Doctors and activists watching respiratory illnesses spread around the nation are bracing for disaster, just two years after anti-government uprisings against President Daniel Ortega turned violent.

Facing withering criticism, the government released a report last Monday stating that critics were trying to sow chaos, and that the vast majority of people in the country, the second-poorest in the hemisphere, could not afford to lose work under a strict lockdown.

In the document, which was posted online, the government compared its approach to that of Sweden, challenging “one-size-fits-all” tactics and arguing that each country’s response to the pandemic should be tailored to its own reality.

The document did not say how many people had been tested for the virus or explain why the government has allowed mass events – like food festivals and a march called “Love in the Time of Covid” – to continue as planned.

In a video the government prepared, Paul Oquist, a US-born adviser to Mr Ortega, said people in the countryside could not shelter at home because they were busy milking cows, gathering eggs and finding wood. Some 80 per cent of workers in Nicaraguan cities have informal jobs, he said, and if they do not work, they do not eat.

Mr Oquist added that the country’s health system was prepared for the outbreak because the Ortega government had increased the number of hospitals and doctors over the past 13 years. Nineteen hospitals were designated to respond to the virus, and a mass campaign to disinfect taxis, buses, schools and markets was under way.

For almost two months, the government reported only handfuls of infections. In late May, however, as signs of the spread of the virus became more obvious, the government’s count shot up 10-fold, and the ministry of health now says it has confirmed 759 cases and 35 deaths.

The Citizen Observatory, an anonymous group of 90 doctors, epidemiologists and other public health volunteers who formed an underground organisation to track coronavirus cases in Nicaragua, puts the coronavirus death toll in Nicaragua at 805. They have counted 3,725 cases as of Saturday.

The government says routine pneumonia cases, which are no higher than normal, are being conflated with the virus.

Amani Acevedo said the absurdity of the pneumonia diagnosis given her father, a 61-year-old retired executive assistant who died after a two-week illness, was underscored by the timing of his funeral: midnight.

Although experts say it is not necessary, people dying of “atypical pneumonia” are being buried quickly because of an apparent fear of contagion – making the incorrect diagnosis obvious, the family said.

Since when, Ms Acevedo asked in an interview, do Nicaraguans bury their dead at such hours? Pneumonia cases in other years had not led to such hurried, late-night funerals. “My father did not die of pneumonia,” she said. “My father died of Covid-19.”

The pandemic has arrived at a time when trust in the Nicaraguan government is low. Two years ago, enormous uprisings against Mr Ortega left hundreds of people dead or in prison. In the document released last Monday, the government asserted that its opponents were trying to use the pandemic to force economic collapse and undermine Mr Ortega’s administration at a time when the economy is still reeling from the uprisings, which it says cost more than 150,000 jobs.

Some doctors say they fear speaking out, since it could cost them their jobs – or worse – as was routine during the political crisis. Dr Carlos Quant, chief of the infectious disease unit at Manolo Morales Hospital in Managua, said at least 100 medical workers at his hospital were out sick, yet the hospital stopped testing staff members for the illness.

He said that it was unclear whether there was a shortage of testing supplies or a bottleneck at the testing facilities centralised by the government, but that few of the patients who probably died of the disease were likely to have had the correct cause of death listed on their death certificates.

Nicaragua has not accepted the organisation’s offer to send international experts to carry out an epidemiological analysis and an evaluation of Nicaragua’s health services, he said. But he said the government did eventually agree in recent weeks to limit the size of mass events.

While the government has not closed schools, most classrooms are empty: parents are keeping their children home. “The whole world has to understand the truth of the crime that our government is committing,” said Elena Cano, whose 46-year-old son, Camilo Meléndez, the facilities manager at the National Assembly building, died on May 19th after trying to get medical care several times.

His death certificate says he died of acute respiratory failure as a consequence of “unusual severe pneumonia”. – New York Times